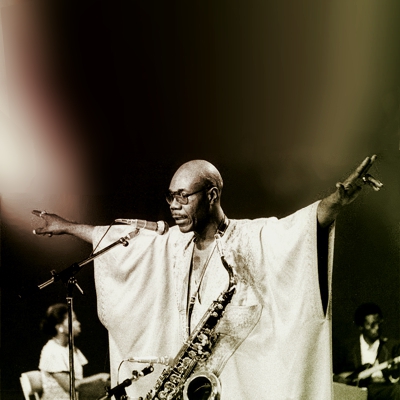 Oh, man, here it comes. Manu Dibango died last Tuesday from Covid-19. He was 86 and had been playing live as recently as last year. Before you say "high risk" because of his age, considering he was a saxophonist, his lungs were probably in better shape than your average 86 year old. It's hitting home, if it hadn't already.

Dibango was from Cameroon, and his "Soul Makossa" was one the first African songs to chart in the US, hitting #35 in 1973. He released 72 LPs, and only a few are compilations. Sure, there are probably some stinkers in there, but I gotta say, the percentage must be low cause I've yet to hear one. Everything I've heard has been top rate, from Afro-funk to soul jazz, to Afro-beat. Shit, he's worked with Fela, Art Blakey, Herbie Hancock, Don Cherry, Sly and Robbie, King Sunny Adé, Youssou N'Dour and Hugh Masekela. Yeah. You should listen to him.