SKY SAXON: THE SEEDS, THE ZEROS AND THE LEGACY OF REBELLION

Last Thursday morning, on the Zeros' Javier Escovedo's Facebook page there was a simple one line tribute "I got the Seeds on the stereo", a line lifted from the Zeros song "Wild Weekend", one he wrote thirty years ago. To anyone who knows the Zeros and the Seeds, the message was apparent, and there was perhaps no more fitting tribute. When "Wild Weekend" was originally released, that simple nod to the Seeds added much to the Zeros' pedigree. While a lot of punk bands at the time cited the New York Dolls, the Stooges, the MC5 and other post-garage bands (which the Zeros did too), few mentioned the Seeds, the Standells, and others from the first garage era. It was clear that the Zeros were not jumping on some sort of bandwagon, this was pure lineage.

Unlike the "destroy (something)", "anarchy (something or other)" prevalent in '77 era punk lyrics, the Zeros, like the bands of the garage band era, touched on the pulse of teen angst. They didn't have to scare parents, they just reminded us not-quite-adults that parents were the opposing team. Nowhere did they convey it better than their in-your-face second single "Wild Weekend". We enter the scene, with the parents gone, a girl on the way over, and a six-pack procured:

The fact that Javier chose that for his Facebook header on Thursday says volumes. It was the same day the original Zeros line-up was reuniting for a hometown gig, for the first time in years. He could have plugged the show, or the recently released "Zeros Live in Madrid" DVD, but he didn't. The tip of the hat did not go not unnoticed. It was, in fact, how I figured something in the Sky Saxon Seeds camp had happened.
.
[7/4/09: The LA Times July 4th account of the Zeros' reunion show concludes with "Earlier in the day came news of Michael Jackson's death, yet the Zeros have another musical icon in mind. The final encore song is "Pushin' Too Hard," a garage rock classic and anthem of romantic angst by the Seeds, whose singer Sky Saxon also had passed away that day."]
.
You've no doubt heard that Sky Saxon, lead singer of the Seeds, sneered his last on Thursday. With him, a piece of our team passed. Unlike most of his contemporaries, he never really crossed over to the other side. To wit: most middle-aged people would feel comfortable, even honored, to sit down and dine with Mick Jagger. But you put a sixty-something Sky Saxon in front of them and they would run. On the other hand, twenty-somethings would look at him and instantly know that he had something going on, at least enough to know that he wasn't like their parents. The phrase "cool old dude" comes to mind.
.
"I ran out of gas one day, so I took Michael Jackson's album in, and all I could get was a dollar" - Sky Saxon, 'Rolling Stone' #456
.
Back in 1976, Lester Bangs, wrote an excellent essay "Protopunk: The Garage Bands," in which he described the Seeds appeal:
.
"For my money, the Seeds best epitomized the allure L.A. had then: there was real smog in Daryl Hooper's organ melodica and Sky Saxon's Mick Jagger routine seemed somewhat more convincing, though every bit as trashy as all the others of the era. Perhaps it was because Sky Saxon really believed every moronic word that he was singing in their rattling little songs, each sounding the same as their one big hit, 'Pushin' Too Hard.'"
.
"All the bikers around San Diego thought the Seeds were the apocalypse, then. I recall one hog-ridin' couple, Candy and Smacker, who didn't take the Seeds first album off their turntable for three solid months."
.
Take it from Candy and Smacker...and Lester Bangs...and the Zeros. No further endorsement is neccesary.
.
The Seeds - Pushin' Too Hard mp3 at For the Sake of the Song
The Seeds - Can't Seem to Make You Mine mp3 at For the Sake of the Song
The Seeds - No Escape mp3 at For the Sake of the Song
The Seeds - Mr. Farmer video on YouTube
The Seeds - Pushin' Too Hard video on YouTube
The Seeds - Can't Seem to Make You Mind video on YouTube
.
The Zeros - Wild Weekend mp3 at Last Days of Man On Earth
The Zeros - Beat Your Heart Out mp3 at Last Days of Man On Earth
Zeros Reunite for Summer Shows at the L.A.Times
Lengthy Zeros bio at Che Underground
Sky Saxon photo by Mark Berry
Posted by Tom G. at 12:37 PM No comments:

THE KING OF POP IS STILL ALIVE 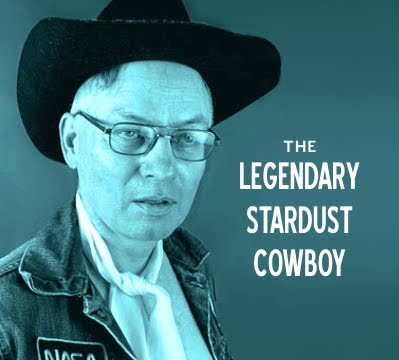 Several years ago, I came home from the beach and there was a message on my answering machine. After tracking sand all over the living room, as is my habit, I played the message, and practically fell on the floor. "Tom Griswold, this is the Legendary Stardust Cowboy, I want to play in your town..." the message started. Lower jaw agape, I listened to the rest of the short message, and wrote down the phone number he left. It was the same one I had left a message at a few weeks earlier, after seeing it on the bottom of a promo 8 x 10. When I called it a few days later, it turns out that it was a record store that "the Ledge" hung out at, and the record store employee told me that everyone at the store was kind of amused by his eccentric ways, but that he could be kind of a pest. ("Every record store has its pests," I was thinking, remembering a past visit to Tasha's, a old beater of a record store in downtown San Diego, arriving just as Wildman Fisher was getting 86'd.) I left my phone number with the employee and just kind of forgot about it. About a year later, I came home , and, again, there's another message from the Ledge. "Tom Griswold, this is the Legendary Stardust Cowboy. I have a new record coming out on New Rose Records...," it began. This call, more than the first, amazed me. I could just picture him, dialing every goddamn phone number he had, long distance be damned, to promote his record, simultaneously wiping out any royalties he may have earned. It defied rational explanation; a hallmark of an outsider.

NOW GET READY FOR THE REAL WORLD 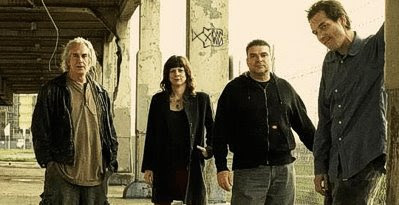 If you have kids, or know kids, who have that tough guy attitude, think that an outfit, a little ink and a goofy haircut makes the cooler than shit, and you're ready to slap 'em upside the head, there is hope. You don't have to resort to physical violence, just try a little aural assault. Let Flipper help. Yeah, Flipper. How to best describe Flipper? You know how it is when you go swimming and you get out of the water, and you just can't help yourself; you just have to do the do the one nostril snot rocket? That's what Flipper can do for someone who's had too much, well...(for lack of a better term) pussy music..
Flipper is back at it, with a new studio album, "Love", an upcoming live album "Fight", and a recently reissued back catalog. Of course, there are those who might say that Flipper's been going downhill since the release of their second 45, "Sex Bomb" a quarter century ago. I, too, was dismayed when it appeared on their first LP, Generic Flipper, with saxophone and no car crash. But you know what? Even the mellowest Flipper has the requisite dirge to do the job.
.
Here's Flipper's latest, "Be Good" (which has Bruce Loose sounding almost like John Denny) and their opus, the original version of Sex Bomb. (The yelp right after the car crash at 4:14 still has me in stitches...)
.
Flipper - Be Good mp3 at MBV Music
Flipper - Sex Bomb mp3 at Lil Mike's [Pop-up filled] Last Known Thoughts
Flipper's Official Site
Posted by Tom G. at 5:53 PM No comments:

ANOTHER HUMDINGER FROM DAPTONE HQ 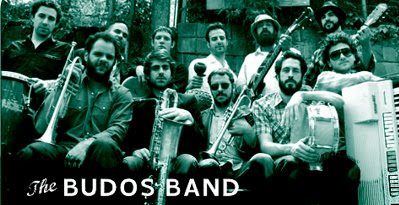 A laid back Afro-funk vibe, perfect for a summer evening BBQ mix, on one of those after beach sunburn-nursing nights. The Budos Band is a horn heavy twelve-piece, made up of different Daptone band members. Can you dig the Budos beat? I know that you can....
.
The Budos Band - The Proposition mp3 at Silence is a Rhythm Too
The Budos Band - Adeniji mp3 at Rollo and Grady
The Budos Band -Chicago Falcon mp3 at World's Fair
The Budos Band at Daptone Records
Posted by Tom G. at 6:51 PM No comments:

THE ONLY CARD I NEED

Ever wonder what "Ace of Spades" would sound like as a full-on funky soul send-up replete with screams, breaks and horns? Dig it, this one's a keeper!
.
If you're a little skeptical about how it translates, you're not alone. But, unless you know the original well...no, even if you know the original well, it might not hit you until you hear Lemmy's future epitaph, "That's the way I like it, I don't want to live forever!" It works, primarily because Reed has the pipes and the soul sensibility to interpret it remarkably well. Now, you wanna feel old? The original (which should be a staple in the collection of everybody over 40) came out in 1977, 32 years ago. Reed is 23. Yeah, uh-huh, his parents probably hadn't even met...
.
Eli "Paperboy" Reed and the True Loves - Ace of Spades mp3 at Ryan's Smashing Life
Posted by Tom G. at 6:03 PM 1 comment: