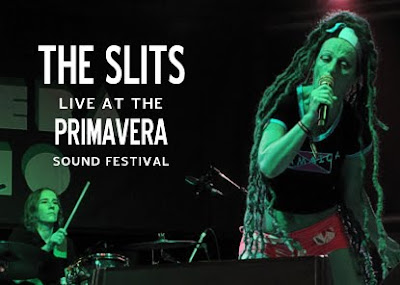 If you would have told me thirty years ago that I'd be posting a link to a legal download of a May 2010 live set by the Slits, recorded at a festival in Barcelona, I would have asked if people got there in flying cars and jet packs. Seriously, it seems so odd to even be mentioning the Slits long after they were the goofy kid sisters of the UK punk scene. But, listening to the between song comments of this set, they still seem like goofy kid sisters. And therein, to me, lies the appeal.

I found the link to the set on WFMU's Beware of the Blog, always a deep well of esoteric shit. They posted the set, among others, on the Free Music Archive, a site with legal downloads of all sorts of oddball acts, including one by the Almighty Defenders, a stuporgroup made up of Black Lips, King Khan & BBQ (which gives me the excuse I've been waiting for to post the photo below of the Black Lips in North Ocean Beach, significant only because I pass by that very spot every night on my way to a swim). 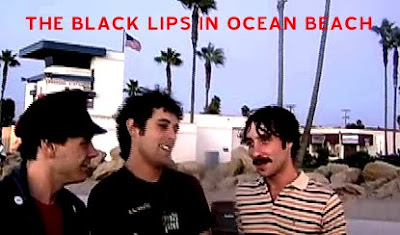 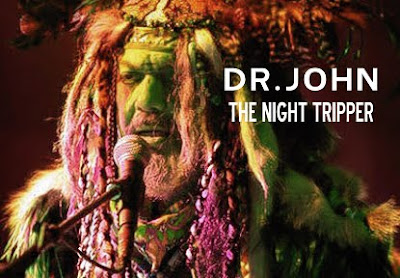 One thing that continually amazes me, because I'm of the pre-internet generation, is the ability to find people with like tastes, halfway across the world. There are a few blogs that I always check out, and two I link to quite often are Diddy Wah (UK) and Spread the Good Word (France). The hosts of these two sites seem to have tastes parallel to mine, which means that I'm constantly finding stuff that, for one reason or another, I've never added to my physical music stash (not to mention, getting turned onto stuff I've never heard).

"Right Place, Wrong Time" is one that I've always loved. A hit for Dr. John in the seventies, it's probably his best known song, and, as far as I know, the only one to chart. The fact that it did is kind of amazing in itself. The intro is killer, with a clavinet (I think) starting for a couple measures, followed by the drums and horns, then the bass and congas, and finally the guitar. An excellent cut of funky seventies New Orleans gumbo. Turn it up, loud and crank up the bass!
~ NOTE: ALL MEDIA IS HOSTED BY THE BLOGS & SITES NAMED BELOW ~
Dr. John - Right Place, Wrong Time, and I Been Hoodood mp3s at Diddy Wah
The Meters - Right Place, Wrong Time mp3 (+ 2 others) at Ear Hole
Jon Spencer Blues Explosion - Right Place, Wrong Time at Soundtracks.cz
Posted by Tom G. at 11:56 AM No comments: 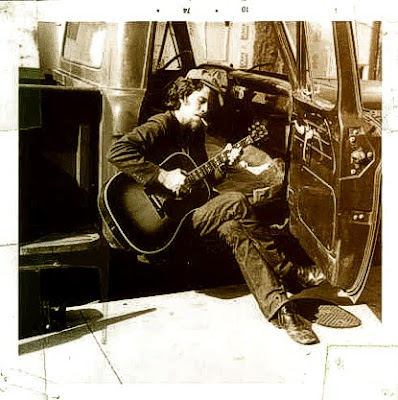 Above photo by Virginia Curtiss (1974)

Back when I was in high school, I had a buddy whose Dad was really into folk music. For a few years running, he'd pile his son, me and my brother, into his car and take us out to the San Diego Folk Festival. I don't have many memories from the shows we attended, but I do remember that it was the first time I'd heard of Lou Curtiss and his record shop, Folk Arts (then at the end of India St., where Gellato Vera is now). To those not from the San Diego area, Lou Curtiss is probably not a familiar name. But, if you lived here, you'd likely know that he's been championing roots music for a long, long time. He opened his record store and organized the first San Diego Folk Festival in 1967, and just kept going. He later helped book music for the early Adams Avenue Street Fairs and, after that, the Adams Avenue Roots Festival. He writes a column for The Troubadour, and has a radio show, "Jazz Roots," on the local jazz station (heard live on 88.3 FM and online, Sundays from 8:00 to 10:00 Pacific Time). All this and he's an active archivist and researcher for the Smithsonian and Library of Congress.

Folk Arts was, and still is, a magnet for those looking for out-of-print recordings. Shop visitors run the gamut; past customers include Muddy Waters, Horace Silver, R. Crumb, Joan Baez, and local boy-done-good Tom Waits. Waits, a store regular back in the day, said of his friend, “Lou Curtiss is a heroic curmudgeon, entrepreneur and keeper of the flame.” Which brings us to the impetus for this post. When I ran into a post on Captains Dead, with Tom Waits from the 1974 Folk Festival, I had to post a link, for a few reasons. The fact that this is early Waits, without a full band, accompanying himself on guitar and piano, was reason enough. Then, there's chatter between songs, which is really, really, funny in places. And the excellent quality of the recordings didn't hurt. The big reason, though, was to publicly thank Curtiss, for doing what he does, humbly, and without tooting his own horn, for so many years. He's every music lover's cool older brother. The man is a local treasure.
~ NOTE: ALL MEDIA IS HOSTED BY THE BLOGS & SITES NAMED BELOW ~
Tom Waits at the 1974 San Diego Folk Festival at Captain's Dead NOTE: As of 11/8/11 these links are dead, but the ones on the link below are still live:
Another live Tom Waits set from 1979, 20 mp3's at Captain's Dead (Right click song titles to download)
Folk Arts Rare Records, Curtiss' record store
The 4th annual SD Folk Festival mp3s at Folk Arts, Sam Chatman, Sam Hinton, Merle Travis and others
Samples from the Lou Curtiss Sound Library
"Lou Curtiss keeps American roots music alive here" at SignOnSanDiego 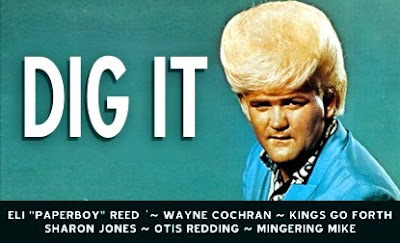 Here you go. A mish-mash of soul music, some old, some new, some weird. What had started as a quick post about Eli "Paperboy" Reed's newest single "Explosion," became a couple hour long troll for random soul shit. First, about Reed: Up until now, everything I've heard of Reed's has been straight up soul, even his reworked version of Motorhead's "Ace of Spades." He's got an extraordinary voice, and his band is reliably retro, and the new one, "Explosion" follows that pattern. Though a bit of a faster paced Reed, he's still sticking to the formula (which must have been working because he's now signed with a major). But then I just ran smack dab into a oddity. Reed on a track by, of all people, Basement Jaxx. Make of it what you will. (A reminder: there's a little comment link below that is begging.)
Another current/retro soul act, Kings Go Forth are, well, more than a little influenced by Curtis Mayfield, though there's a little early Gamble & Huff thing going on too (think Archie Bell & the Drells "I just Can't Stop Dancing"). They're based in the soul hotbed of...wait...Milwaukee? Having never gigged beyond Indiana before being signed, leave it to Luaka Bop to get them. Semi-related: There was a thing in the New Yorker recently, about Go Forther Andy Noble in an NYC record store.

An interesting side story is about the Kings Go Forth album cover. There's been much ado about eccentric, primitive, outsider and oddball art. Little has been celebrated about the artistic music-loving hyper-prolific teenager. I encourage you to read the story of Mingering Mike. Because, this is pre-computer music geek godhead.

And then, there is Wayne Cochran. "The White Knight of Soul," poster child for weird white soul dudes. The dollar bin James Brown. That's him, at the top of of the post, with the big hair. Crazy looking; check out his moves on the YouTube clip.

And, because it's her due, Sharon Jones. She's finally getting the attention she deserves, this time on the network news. Good for her.
~ NOTE: ALL MEDIA IS HOSTED BY THE BLOGS & SITES NAMED BELOW ~
Eli "Paperboy" Reed - Explosion mp3 at Dr. Mooney's 115th Dream
Kings Go Forth - One Day mp3 at Far From Noise
Kings Go Forth -Now We're Gone mp3 at Aquarium Drunkard
Kings Go Forth - I Don't Love You No More mp3 at KEXP.org
Kings Go Forth at Luaka Bop
Soul Slam: Andy Noble goes to a record store, at the New Yorker.
The Home of Mingering Mike
Basement Jaxx with Eli "Paperboy" Reed - She's No Good mp3 at Audio Drums
Otis Redding - Satisfaction and Security mp3s (live) at the Adios Lounge
Wayne Cochran and the C.C. Riders - Get Down With It mp3 at The Soul Girl
Wayne Cochran and the C.C.Riders - Going Back to Miami video at YouTube
Wayne Cochran bio at Roctober
Sharon Jones on CBS News (6/6/10)
Posted by Tom G. at 6:18 PM No comments: 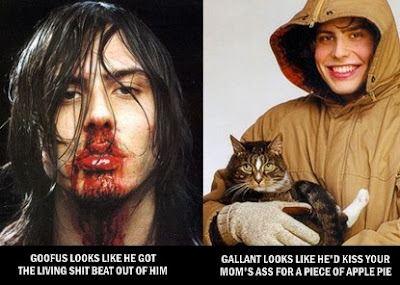 I've always had a soft spot for Andrew W.K., despite being somewhat indifferent about his music. His debut leaned heavily on simplistic headbanger anthems, but, still, you kinda knew there was something different about the guy. First off, he was always wearing a white T-shirt and white jeans, pretty much the complete opposite of what you'd expect. And there was his preoccupation with songs about partying: "Party Hard," "Party 'til You Puke," and "It's Time to Party,"...the kind of stuff that makes "Margaritaville" look like a May Pole dance. That was just an initial impression, but enough to keep him on the radar.
Shortly after hearing his debut (and it's subsequent relocation to the "can't see this ever bearing repeated obsessive listenings, so might as well sell it" pile), I was lurking in a record store, talking to a shopper (that's a person who actually buys things) who said that he had hung out in Andrew W.K.'s trailer at a recent Warped Tour show, and that he was a really, really nice guy. He elaborated, adding that a fan had come up to the trailer door and, while conversing with W.K., happened to mention that he was having trouble paying his rent. Without being asked, W.K. got out a checkbook and wrote the kid a check. 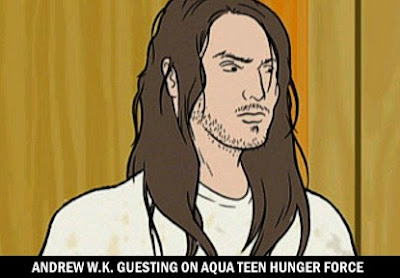 Every subsequent thing I've heard about him has been just as confounding. He's obsessed with Johan Sebastian Bach, he produced Lee Perry (?!?), toured with a string quartet, appeared as a motivational speaker, and hosted a kid's show on the Cartoon Network (the awesomely named "Destroy Build Destroy"). That's just a few, but still a pretty big bag of tricks.

There really are no two sides to Andrew W.K., there are a zillion sides. He's got a lot of quirks; enough to keep things interesting, if not always listenable. Here's a few:

Exhibit A: The party songs: "It's Time to Party," "Party Hard," "Party 'til You Puke," "Party, Party, Party," "We Party (You Shout)," "Big Party," and "The Party God;" seven variations on a theme, mp3s at Metal Bastard
Exhibit B: The Tiny Desk Concert: Two long improvisations, a very different version of "I Get Wet," and a beautiful cover of Jimmy Webb's "The Moon is a Harsh Mistress," all with just vocals and electric piano: The Andrew W.K. Tiny Desk Concert (video) at NPR.org
Exhibit C: Destroy Build Destroy at the Cartoon Network and YouTube
Exhibit D: Andrew W.K. on Bach at NPR.org
Exhibit E: "Wolf Eyes Rule" mp3, a song by a band, Wolf Eyes, that he produced, guesting on vocals, at The Walrus
Exhibit F through Z: The Further Misadventures at the Andrew W.K. Official Site
Posted by Tom G. at 6:17 PM No comments: