ROCK OUT WITH DEBBIE D.

Yeah, you're wondering who Debbie D is, right? She's been posting on WFMU's Beware of the Blog, and after looking through her posts, you'll find yourself thanking her. She was the one who posted over four dozen killer mp3's under the title "Songs the Wobbles Taught Us", which was the original versions of songs the Wobbles have covered. Turns out she's done a series of these, most recently "Songs We Taught The Blasters", 33 songs that the Blasters have covered. You can guess what's on that post. Everything from Little Willie John and the Staple Singers to Don & Dewey and the original version of California Sun (by Joe Jones, not the Rivieras...who knew?!). She also did a "Songs We Taught the Fall", which is eclectic as all get-out. The Sonics (aka Godhead), the Monks, the Saints, Lee Perry, Leadbelly, Merle Haggard, Dean Martin, Beefheart...you get the idea. (Which, of course means that if I were getting tanked at a record party, I'd rather have Mark E. Smith spinning than one of the Alvins. Though Phil or Dave could take over during a pee break, no problem.)
When you add similar posts featuring songs that the Mummies, Untamed Youth and the Gories have covered, you're pushing 120 awesome mp3s, even if you discount the few "don't need thats". Granted it takes a total freak to dig the range of music on these posts, but if your tastes are anything like mine, you're wasting time reading this, just go there and start clicking!

HIGHLY RECOMMENDED: All of Debbie's posts at WFMU's Beware of the Blog
Posted by Tom G. at 8:09 PM No comments:

THIS WOMAN IS A SAINT 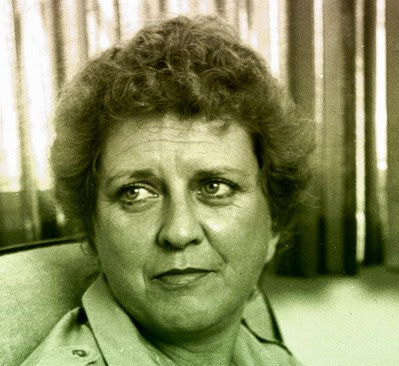 That's my Mom. I can't even start to list the reasons why she was a saint, but trust me on this one. She had five kids in five years and anyway you add it up, that's non-stop diapers for a long-ass time. Never mind five sack lunches a day, the grocery shopping, the school clothes shopping, the PTA meetings, the laundry, the swimming lessons, the housework, the Christmas shopping, the enchiladas done until they were just crispy around the edges and the sloppy joes made with onion soup mix. After we hit our mid-late teens, my Pop split and she handled the rebel years of her kids solo, with grace and acceptance. That's just the beginning. (If I continued, we'd be here all night.) She was, and is, the coolest Mom I have ever met.
.
It's Mother's Day, and although she would have preferred Nat King Cole, Stan Kenton or Gene Krupa, I'm sure she would pound the minute steaks for dinner to the beat of "Mother Popcorn" by the GFOS James Brown.
.
(Thank you Boogie Woogie Flu for posting it.)
.
James Brown - Mother Popcorn mp3 at Boogie Woogie Flu
Posted by Tom G. at 7:21 PM 2 comments:

[NOTE: After testing the mp3 links in this post, I realized that the the hosting site Pogo A Go-Go has disabled direct links, which is his perogative. Rest assured though, all of the tunes can be found and downloaded at his site: Pogo A Go-Go, with links to specific posts below. In other words, I'll be damned if I'm going to delete this post after going through the hassle of writing it...]
.
Every once in a while, in need of something to post, I'll start browsing blogs that I haven't been to in a while and find a few mp3s that scream "download me now you hack, or you'll forget where you saw me!" Today's screaming mp3s come from Pogo A Go-Go. There's plenty to devour there, and some, well, some of that screaming variety. Case in point: "A Different Story", by the Subway Sect. The Subway Sect were contemporaries of the Sex Pistols (they were in the early punk fanzine Sniffin' Glue for cryin' out loud!) and that whole first wave of UK punk, but were already leaning toward a post-punk kinda "I'll let those guys bang out the chords, I'm a little smarter than that..." type of sound. Despite the fact that they may have thought themselves above three chord simpletons, they came and went after only two proper 45s (a comp of stuff came out later).
.
Fil, the host of Pogo A Go-Go, demonstrating that he's clearly got his head on straight, is currently ranting about some really messed up venture called "The Rock n' Roll Experience." It's some really fucked up hoity-toity thing where you can pay a few thousand dollars and go to Hawaii to jam (and play golf) with "rock legends" like Gerald Casale (Devo), Earl Slick (one time guitarist for Bowie), Al Jardine (the second lamest Beach Boy, after Mike Love) and Glen fucking Matlock (yeah, a former Sex Pistol). Oh yeah, there's also Clem Burke (the drummer from Blondie) and, it pains me to even mention it, Wayne Kramer (from the MC5). Get out your sticks kids, it's definitely time to draw the line. (Remember the scene in Animal House when John Belushi, as Bluto, says "...Neidermeyer? Dead!!"? It's kinda like that...)
.
Showing his kindred soul side, Fil writes:
"Dearest Friends, this is a travesty. This is not rock 'n' roll. This is balding, fiftysomething, system analysts with their remaining strands of hair scraped behind their heads into dork handles. This is Euro trustafarian brats decked out in Bench and Von Dutch. This is the annoying, botox-injected fucker who cut me off today in his Porsche Boxter. This is whore meets john." Sting like a bee!
.
Besides Subway Sect's cut, he's also posted "The Great Rock n' Roll Swindle" which has always been credited to the Sex Pistols, but was actually the music of Pistols Steve Jones and Paul Cook, with all of the people auditioning to be Johnny Rotten's replacement trading vocals (including the wonderful stylings of Edward "Who Killed Bambi" Tudor-Pole, who was chosen to be Rotten's successor). And, to take us back to a time before trustafarians, he's also posted Chuck "I see see London, I see France" Berry's "Johnny B. Goode".
.
Proving he's not a one trick pony, Fil's previous post featured five vintage ska tunes, including Daddy Livingstone's "Rudy, A Message To You" (covered during the Two-Tone era by the Specials). And an earlier post has Mudhoney's "This Gift". A whole bagful of stuff over there; this is just the few I found in a matter of minutes.
.
Subway Sect - A Different Story mp3 found on this post
Sex Pistols - The Great Rock n' Roll Swindle mp3 found on this post
Chuck Berry - Johnny B. Goode mp3 found on this post
Daddy Livingstone - Rudy, A Message To You mp3 found on this post
Mudhoney - This Gift mp3 found on this post
All found on Pogo A Go-Go
Posted by Tom G. at 7:56 PM No comments: