Given that Isacc Hayes' "Shaft" is such an universal icon of 70's cinematic soul, it's kind of a drag that fewer people are familiar with his ability to radically interpret already familiar songs, as he did with Burt Bacharach's "Walk On By." He turned a great pop song (a hit for Dionne Warwick) into a twelve minute opus of late night lovin'. The damn song builds up, slows down, builds again, climaxes, and ends with a spare drum beat that allows you to catch your breath. How did he hear that? Amazing.
"I felt what I had to say musically could not be said in two minutes and thirty seconds, ... So I did my thing. If it was a hit, great. But I just did what I wanted creatively.”

He also did a nine minute version of "Close to You" (a hit for the Carpenters), another late night lovin' reinvention.
Isaac Hayes - Walk On By mp3 at Louder Soft
Isaac Hayes - Theme From Shaft mp3, Close to You mp3 and three others at the Vinyl District
Theme From Shaft - Eight covers and variations at Moistworks (including a version by Sammy Davis Jr that just makes you want to slap him.)
Posted by Tom G. at 8:19 PM 1 comment: 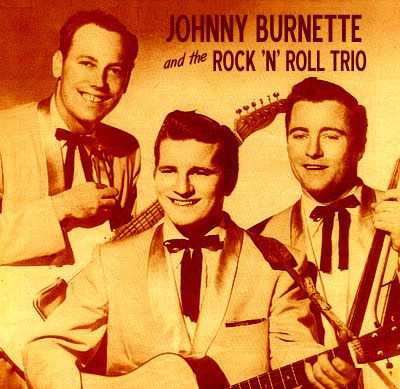 While the definitive version of "Train Kept A Rollin" is open for debate, the distortion-laden version by Johnny Burnette and the Rock n' Roll Trio [sic] has gotta be the most groundbreaking. It's a general consensus that it was the first rock n' roll record with fuzz on it. What's more significant is that it set the template for just about all future interpretations.
Almost without exception, subsequent rock n' roll versions of the song all ape the Trio's treatment, itself a cover of the original by Tiny Bradshaw. But the treatment and the fuzz was all theirs. Just whose fuzz in particular, though, remains a question.

In this corner, we have the accident, according to guitarist Paul Burlison, "Just before a show, the leather strap on my blond fender amp broke, and the amp fell to the floor. When I plugged the guitar in, it had a real fuzzy sound. I looked in the back of the amp, and one of the tubes was barely sticking in the prongs -- It was acting like rheostat. The guitar sounded pretty good, so I left the tube the way it was. From then on, whenever I wanted to get that sound, I'd just reach back there and loosen the tube. It sounded real funky."
In the other corner, we've got studio whiz Grady Martin. WFMU's Beware of the Blog cites session player Martin as the guitarist. I thought that possibly a slip-up, because it also says Martin invented the fuzz guitar sound in 1960, four years after the Trio cut "Train Kept A Rollin'" and "Honey Hush", another fuzzed-out rocker. (See Country Fuzz Spectacular link below for more on Martin and other country fuzzers.)

In the process of fact checking online, I found the writing of a true fuzz-orgin fiend, and it opened up a real can of worms. It's a lengthy dissertation on the origin of the fuzz on "Train Kept A Rollin'." When I say lengthy, I mean that I spent over a half hour on a single page. It comes up with some hard-to-ague points about said fuzz, including an argument that it probably wasn't fuzz at all.

Though the still-debated fuzz was a big part of what made the Trio's version memorable, it was the overall treatment and sound, and Burnette's manic, panting, vocals, that made it theirs and a Rockabilly milestone.
I'd like to believe Burlison's version, if only to contemplate the possible power of a mistake. Either way, the lineage of the song is something remarkable and comforting. Whether a dropped amp or a song three ex-boxers made their own, I marvel at how it fed through the Yardbirds and Led Zeppelin, and on through Aerosmith, and continues today in the bedrooms of future shredders with big dreams.
Johnny Burnette and the Rock n' Roll Trio - Train Kept A Rollin' at LexJansen.com
Johnny Burnette and the Rock n' Roll Trio - Honey Hush mp3 at RockinDog.com
Johnny Burnette & the Rock n' Roll Trio - Rockabilly Boogie (streaming) at Walk Between the Lines
Country Fuzz Spectacular at WFMU's Beware of the Blog (28 country fuzzers)
Did Paul Burlison or Grady Martin play guitar for Johnny Burnette & The Rock'n'Roll Trio? Long-ass dissertation by Victor Gordon & Peter Dijkema at the Rockabilly Guitar Page