"Well this sure sucks." That's what ran through my head the first time I heard the second Modern Lovers album. Actually, the second album was credited to "Jonathan Richman and the Modern Lovers." That should have been a tip-off.
.
Not that the second one wasn't entertaining. It was, as were all of Richman's subsequent records (in various solo and Modern Lovers incarnations). But the first one had a mood, a droning vibe that just plodded along, Velvet Underground style, and was both brooding and personal. In comparison, the second sounded almost like a children's album.
.
Richman's been at it for over thirty years now and has yet to come close to the overall feel of the debut album. It's all there on that first one. Jerry Harrison's organ, sometimes haunting, is always lurking. The pace of the album is steady, some songs more uptempo but all have this...feel. The guitar work, the most underrated ingredient, was amazing without being flashy or, technically, too good. (If you're gonna mention the John Cale connection, I think we can assume that it's common knowledge. Though, with thirty years, he's had plenty of time to rope Cale in for a second go, if he really wanted it.)
.
Everything after his first album is just goofy shit, if you ask me. Songs about chewing gum wrappers, abominable snowmen, martians, and now a recent ditty about cell phones. While admittedly clever, it's oh-so-close to a final nail (the lyrics of which I agree with 100%, though.). The one thing that saves it? Who else would write a song about not needing a cell phone? Therein lies the appeal of Jonathan Richman. But, still, I'm running low on patience.
.
From the first album:
The Modern Lovers - Old World mp3 at Siblingshot on the Bleachers
The Modern Lovers - Hospital mp3 at You Ain't No Picasso
The Modern Lovers - Roadrunner mp3 at You Ain't No Picasso
.
After the first album:
Jonathan Richman and the Modern Lovers - That Summer Feeling mp3 at Tsururadio
Jonathan Richman - You Can Have a Cell Phone, That's Okay, But Not Me mp3 at Monkey X
Posted by Tom G. at 6:17 AM No comments:

WORTHY, I KID YOU NOT

You, like everybody else, have probably heard the Supremes' hits, to the point that you probably don't even really listen to them anymore. There so ingrained that they just go in one ear and out the other. I'm on the same boat (yeah, "Come See About Me," whatever...). So when I happened upon a Supremes' cover of "Come Together," I downloaded it with mild curiosity and that's about it. It was on the blog "Robots In Heat" which is one of those bare bones sites with no text other than song titles and artists. I check it out periodically because the head robot always puts up weird unrelated songs that invariably seem randomly picked. But the songs he chooses are always a little left of center, so, again, I bit.
.
I was really surprised at this one. At the time it was recorded, a post-Diana Ross, Jean Terrell-led, Supremes were headed in a new direction. This meant away from the mascara caked lashes, evening gowns and bouffants, and onto afros and turtlenecks. The sound is far different from what you would expect from Motown as well. So, of course, that means, as a music geek, it was my duty to go trompsing around online looking for production credits (I was convinced that the producer had to have been Norman Whitfield, producer of all the great psychedelic-soul era Temptation cuts). (Follow me here...)
.
As it turns out, the producer was Frank Wilson, who had been recruited in 1963 by Berry Gordy to work out of Motown's newly opened L.A. office. Wilson was well versed in the classic Motown sound, as evidenced by his own 45, "Do I Love You (Indeed I Do)," an impossibly rare Northern Soul favorite. (Long story short, 250 were pressed and all were thought to be destroyed when Wilson decided to concentrate on producing. Two vinyl copies are known to exist, with one selling for roughly $37,000 back in May. The full story is here.)
.
"Come Together" though, sounds completely different from any Supremes I've ever heard, let alone Motown. The pace is much slower than the Beatles' original, reminiscent of Isaac Hayes' reworking of Burt Bacharach's "Walk On By." It's not just the pace; it's ultra-heavy on the sitar and clavinet (!), and the vocals have enough echo on them that they'd have Sam Phillips adjusting his knobs. Worthy of a download, I promise. (So much for "one quick listen and onto other things.")
.
The Supremes - Come Together mp3 at Robots In Heat
Frank Wilson - Do I Love You (Indeed I Do) mp3 at DJNoDJ
Isaac Hayes - Walk On By mp3 at Funky 16 Corners
"Record price for rare Motown disc" at the BBC News
Frank Wilson page at Wikipedia
Posted by Tom G. at 6:57 PM No comments:

You should know him. You probably do. He recorded with, or produced, (...ready?) the Stones, Wilson Picket, Aretha Franklin, the Flamin' Groovies, Duane Allman, the Cramps, the Replacements, Toots Hibbert, Alex Chilton, Big Star, Jerry Jeff Walker, Dion, Dylan, Ry Cooder, Screamin' Jay Hawkins, Mojo Nixon, Mudhoney and many, many more. I knew his name from album credits (remember those?) over the years but never kept a mental tally. After his death, a week and a half ago, I began seeing bloggers' tributes and was astounded by his dossier.
.
He was a musician, and a producer, but he was a music freak first. Like you. Like me. And, if his output was any indication, the man had taste. His "Monkey Man," recorded with the Katmandu Quartet, sounds like the Legendary Stardust Cowboy fronting a Northwest garage band. Red Headed Woman, recorded with the Cramps and showcasing his skills on the 88's sounds like, well, the Legendary Stardust Cowboy fronting the Cramps with Jerry Lee Lewis on piano. Then there's the 1967 straight-up garage rocker he played on with Flash and the Memphis Casuals, "Uptight Tonight." And (what seems to be commonly regarded as) the last great 45 on Sun, "Cadillac Man" b/w "My Babe" by the Jesters, which he sang lead on, though he wasn't a member of the band.
.
This is just a taste. Visit the blogs linked below for the entire story, and a lot more mp3s (remember, "right click, save as..."). And read album liner notes while they still exist!
..
Listen:
Jim Dickinson w/the Cramps - Red Headed Woman mp3 at Boogie Woogie Flu
Jim Dickinson and the Katmandu Quartet - Monkey Man mp3 at The Hound
Flash & the Memphis Casuals - Uptight Tonight mp3 at The Hound
Jim Dickinson w/the Jesters - Cadillac Man and My Babe mp3s at The Hound
Flamin Groovies - Teenage Head mp3 at Beware of the Blog
The Rolling Stones - Wild Horses mp3 at Beware of the Blog
The Replacements - Tossin n' Turnin' mp3 at Boogie Woogie Flu
Mudhoney - Beneath the Valley of the Underdog mp3 at Beware of the Blog
Toots Hibbert - Hard to Handle mp3 at Boogie Woogie Flu
Aretha Franklin - Spirit in the Dark mp3 at Beware of the Blog
Read:
Jim Dickinson post (excellent bio) at the Hound
Jim Dickinson post at Beware of the Blog
Jim Dickinson post at Boogie Woogie Flu
The Jim Dickinson page at Wikipedia
Visit:
His Zebra Ranch studio site
Posted by Tom G. at 9:07 PM 3 comments: 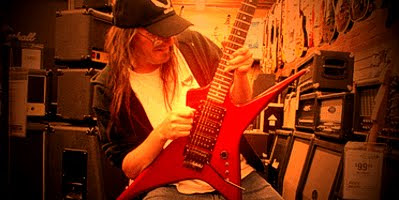 The mp3 blog Doklands refers to "C5" by Moha as "a cacphonous, distoterrific guitar and drum assault". I refer to it as "Guitar Center". Even if you aren't a musician, you may have wandered into a Guitar Center (or a similar music superstore) at some point. If you have, you know the scenario. Rabid guitar and drum fetishists let loose, to freely take their coveted ax or Bonham-sized drum kit for a test run. To the clerks, this must push the Annoy-O-Meter into the red. And the poor guys have to endure it, all day, every day. Just try listening to this song, try listening to it loud, try listening to it from three different rooms at once. Now imagine that, day in and day out. So where's the magnetic ribbons for these guys? Where are the colored rubber bracelets for these men of unrelenting patience, who put their eardrums on the line every day?
.
Moha! - C5 [Guitar Center] mp3 at Doklands
Doklands also has Beefheart's Kandy Korn!
Posted by Tom G. at 8:17 PM No comments: