Browing music blogs recently, I ran into a remix of the Yardbirds' "For Your Love" by Ursula 1000, a name I was not wholly unfamiliar with, having seen it many times in techo and dance blogs and such. I'm semi-open-minded and always game for something challenging, so I thought I'd give it a listen. The verdict: It flat-out sucked. I needed to get my palate cleansed, but quick.
.
When something like this happens, I skulk not in my little rock n' roll safe harbor. I forge ahead to another challenging, yet more reliable, destination. The old fart hitching post: world music..

On the night of my unfortunate introduction to the pile of shit that is Ursula 1000, I found my palate cleanser in Orchestra Baobab, an outfit from Senegal. Very smooth.
.
Orchestra Baobab - Nijaay and Werente Serigne mp3s at Some Velvet Blog
The Yardbirds "For Your Love" remix by Ursula 1000 mp3 at Welcome to the Dance Club (You've been warned)
Posted by Tom G. at 10:30 PM 2 comments:

Jimmy McGriff died last weekend. It is not neccesarily cold to note that McGriff's passing presents an excellent opportunity for jazz neophytes to educate themselves about his music, and the whole Hammond B3 organ thing in general, via mp3 blogs. I don't know much about jazz, but I do know McGriff and Jimmy Smith (the other Jimmy), were like Hammond gods. And I've liked just about everything I've heard, from either of them (and I'm always reminded of why the mods thought they were such hot shit). Get into the Hammond groove, baby!
.
Jimmy McGiff - A Thing to Come By (Pts 1 & 2) and Fat Cakes mp3s at Funky 16 Corners
Jimmy McGriff - Groove Grease and two others at the Leather Canary
Jimmy McGriff - Dig On It mp3 and two others at Some Velvet Blog
Posted by Tom G. at 8:20 PM No comments: 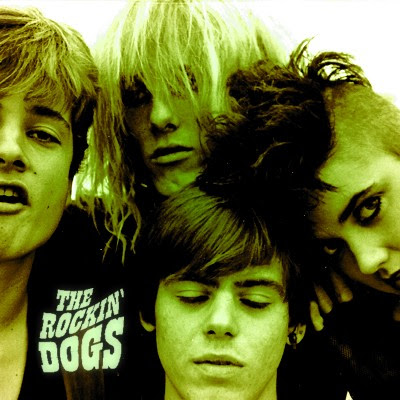 Every town with a relatively healthy scene, has had, at one time or another, their own Johnny Thunders and the Heartbreakers disciples, right? And not all Thunders; a little heavy on the Heartbreakers. Somewhere between punk rock and the Stones; guitar heavy and a little sloppy. Sometimes it may not have even been intentional. The Rockin' Dogs may not have been into the Heartbreakers, but they sure sounded like them. Even the lead and background vocals sound like the Thunders/Lure of yore.
Listen to the guitar, particularly from the 1:00 mark on. [Mp3 link below] The fills (by Dave Ellison?) sound like Thunders, James Burton and CCR-era John Fogerty mashed together. I saw them a few times and they were (pardon the term) awesome. Both guitarists, Dave Ellison and Sam Wilson, were well versed in rock n' roll licks, from all eras, and they weren't afraid of being a little sloppy. I never thought that I'd hear them again. Thanks to Che Underground, I now know that they were pretty much as I remembered, sloppy and rocking out.

Che Underground is a blog about the San Diego's scene within a scene of the 80's, primarily bands associated with the Che Cafe (a venue at UCSD). Hosted by Matthew Rothenberg (former member of Noise 292 and 3 Guys Called Jesus), posters include Ellison, Tom Ward (Gravedigger V, Nashville Ramblers, etc), Bart Mendoza (Manual Scan, the Shambles), Ray Brandes (Telltale Hearts, Town Criers), Dave Klowden....basically a who's who of SD 80's bands. There's a lot of lost music being digitized and posted by Matthew, so stop by and give him an "atta boy".

Okay, so Stereolab isn't just for eggheads, but I can't think of anyone I know who likes Stereolab who isn't smart. Me? I'm on the fence about them. I guess that means I'm not entirely smart enough. One of my favorite comments about them came from a workmate who asked me to turn down the "Chinese water torture" (and he's pretty smart...go figure!). Anyways, when you want to hear something Stereolab-ish, there's very few bands that will fill that role. (Okay, so I'm generalizing again, but you get the picture.) And for that reason, it seems that those who like Stereolab, really like Stereolab. That's the reason for this post. It's a cut from their next album, which is still a couple months out. So, sink your teeth into this eggheads!
.
Stereolab - Three Women mp3 at Fluxblog
Posted by Tom G. at 7:38 PM No comments: