BACON STREET FESTIVAL OF THE ARTS

The pixels from the last post weren't even dry when I got the call from my neighborhood record store (Cow) that the Flat Duo Jets' "Two Headed Cow" (the album I wrote about) had come in. I had enough time driving today to listen to it 1 1/2 times and the whole thing is great. You forget that you're hearing only vocals, guitar and drums. Having been recorded live, the sound can get a little muddy, but turn it up and you are there. Hopefully, at some time, you've experienced an evening in a room dank in a rock n' roll stench. Maybe a little drunk or hazy from the late hour, in a room where everybody is moving; everybody is dancing, laughing, fighting or trying to get laid. And the rock n' roll is blasting, creating a silent movie atmoshphere at a loud volume. That's where this album puts you.

To top things off, today the mail brought a copy of Mike McCarthy's "Teenage Tupelo", a low budget rock n' roll sexploitation movie I've tried to track down for over ten years. More about that after a viewing. In the meantime, here's a sneak peek (Chapters 1-6).

"Daaannng," you say, "how much more culture can fit into one post?" How about spoken word, Trastos style? Here's a link to 70's drag racing radio commercials, in mp3 format:
Drag Racing Radio Spots.
Posted by Tom G. at 8:19 PM No comments:

THIS IS WHAT SWEAT, ALCOHOL AND CIGARETTE SMOKE SOUNDS LIKE.

The first time I heard the Flat Duo Jets was in the late 80's and it was, unbelievable as it sounds now, on MTV. It was a segment on singer-guitarist Dexter Romweber, filmed in the shack he lived in behind his family's house, in Carrboro, North Carolina. He was just a kid, about 19, and had a remarkable reverence for early rock n' roll, specifically citing Elvis, Buddy Holly, Ritchie Valens, Little Richard and Gene Vincent ("there ain't gonna be a wildest [sic] rocker ever again"...). The end of the segment showed a short clip of the Flat Duo Jets performing in front of the shack. The one thing that was striking about the footage is that they seemed like the real thing, nothing forced and not posing. Primitive rock n' roll without a spec of show biz. Very few bands were playing this sort of stuff at the time and it was a full-on aberration on MTV.
.
I had one of their early records, Go Go Harlem Baby, which I played the shit out of, but lost track of at some point (I used to lose a lot of records.) A while back, I bought a used copy of Lucky Eye, their last album. It wasn't nearly as raw as I had remembered them sounding and I was kinda disappointed. Then I saw who produced it, Chris Stamey, an 80's indie pop guy who I've always considered a little too tame for my tastes. Case closed, Lucky Eye was put in the "will not coddle (even though they no longer exist), sell when needed" stack.
.
Yesterday I ran into a post on The Devil Has the Best Tuna about a soundtrack for Two Headed Cow, a documentary about the Flat Duo Jets, and was stoked to find out that there was an accompanying soundtrack with all early stuff, and just as raw as I had remembered them. Here's three songs on one blog and another at a second blog, all four no-brainers. This is the best new (to me) rock n' roll I've heard in a long time, stripped bare and absolutely pure. It's not indie, punk rock, psychobilly, no wave or any other hyphenated crap category. It really does seem like the sound of sweat, alcohol and cigarette smoke.
.
Flat Duo Jets - Rock House mp3 + Everybody's Movin' and Rawhide at The Devil Has the Best Tuna
(Alternative link for the same three songs at Oregon Live)
Flat Duo Jets - Rockin' Bones mp3 at The Walrus
Dexter Romweber interview at Perfect Sound Forever
Video clip here
Posted by Tom G. at 12:51 PM 2 comments:

THIS ONE'S FOR YOU SNAIL

Sometimes it just depends on how you hear a song. What some see as a schlocky cover (and might not even make it through the first listening), others might see as an whacked-out extension of one of the simplest rock riffs of all time. And more than likely anybody who makes it past the thought of a sax player covering Led Zeppelin is listening out of curiosity or knows the name King Curtis. In either case, his reworking of "Whole Lotta Love" is one that begs for repeated "what's going on here?" type listenings.
.
I could have easily been in the schlock-seeing category of listeners had not been for my younger brother Ted, AKA Snail (a nickname with absolutely no relevance to anything, other than being spouted out once by one of my high school friends. In fact, though I address him as Snail only in affection, I've no idea whether he hates it or not). So far on this blog, I've resisted bringing up the profound experience of growing up with my brothers, two absolute rock n' roll hearts, in the same bedroom. It's a subject that goes so deep that, once tapped, would probably read like a biography. Suffice it to say that it not only shaped my taste in music, it shaped my life; and that's not an understatement. Everything musical moment in my life has stemmed from the stereo wars and record collecting of our teens. I bring this up now only because it was a King Curtis tape from Ted that first made me think of Curtis as something other than a hired gun. I was cognizant of his work, but owned none of his solo work.
.
As it is Father's Day, and Ted's birthday was earlier in the week, I will allow myself a slight digression, if only to publicly recognize the influence of both of my brothers, and my unwavering awe at Ted's skills as a Dad. Without an ounce of corn, I gotta say, I love you bro.
.
About the song, though it starts out as a relatively faithful cover, with Curtis's sax replacing the vocals, at 1:15 it turns into a fuzzed out, horn-heavy, 70's movie chase scene freak-out, replete with a Latin tinged rhythm section. You are definitely rewarded for listening to the whole song and, by the time it ends, disappointed the overload doesn't last longer.
.
King Curts - Whole Lotta Love mp3 at AM, Then FM
More on King Curts' Whole Lotta Love at Funky 16 Corners
Posted by Tom G. at 11:58 AM 1 comment:

THE BEAT IS DEAD. LONG LIVE THE BEAT. Eric Bacher said that, at Che Underground. BLOODY HELL, I'M REALLY SAD. Rev Frost of Spread the Good Word said that. Both kept it short, even in the full text of their comments, and for good reason. You get past the simplifications, and it's hard to stop. Especially for someone like Bo Diddley. Both Bacher and Frost were incredibly economic in their words, but both summed it up.
.
If the average person knows anything about Bo Diddley, they know the beat. And they probably know about the rectangular guitar. And maybe about Jerome and the Duchess. But Bo Diddley was much more than the Originator of the beat. 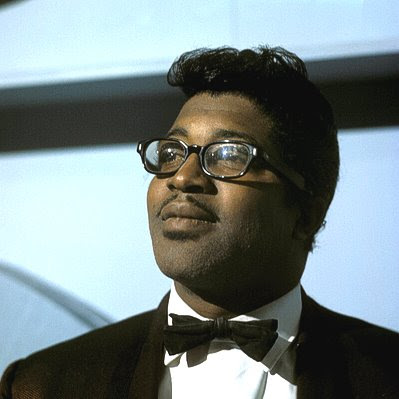 Who else would release, as the A-side of their first 45, a self-titled song? What other early rocker recorded their own music, in their own studio? (C'mon, I mean, how DIY can you get?) And who, before Bo Diddley, had a rock n' roll band that included a woman? And to top all this off, he literally invented his own style of rock n' roll?!! And we haven't even started tabulating the songs yet. (Fuck, do not get me started.)
..
ADDED 6/5: 15 more Bo Diddley mp3's at Probe is Turning on the People
Bo Diddley - Bo Diddley mp3 and seven others, with bio, at Spread the Good Word
Bo Diddley - Diddy Wah Diddy mp3 (and Bo's Bounce) at Diddy Wah
Posted by Tom G. at 9:59 PM No comments: