I HEARD IT ON THE AM RADIO

About a year ago, a neighbor of mine was hanging out and listening to music in my apartment when the subject turned to the incredible ease of finding music in this mp3 age. I was relating that when I started getting into music, there was one source. A beat up clock radio hand-me-down from my parents that all five kids shared. The clock had ceased to function, as did the on/off switch, but my parents, resourceful as they were, had patched it together rather than throw it away. (My Dad installed a new toggle switch and power cord, and my Mom gave it a cosmetic makeover with self-adhesive Contact paper.) I explained to my friend that the radio represented the only means of listening to our own music, and as such was our lifeline to everything "boss." The only problem was, we only had access to a limited choice of music. The looser FM radio format hadn't really arrived yet, so we were weaned on the top hits of the day. It was what it was, and not knowing anything else, we were quite satisfied with what music we did have. But, as I explained to my neighbor, if you liked a particular song, you would have to wait until it was played. That sometimes meant enduring "Sugar, Sugar" (#1 on the weekly playlist in the image above) to get to "Honky Tonk Women" (#3 that week). And it also meant that the radio was on almost constantly. It was, quite literally, the soundtrack to our early adolescent years. 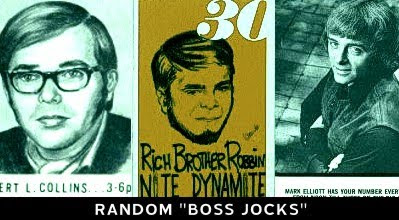 Right at this point in our conversation, my neighbor (who had musical tastes remarkably similar to mine in everything from blues, soul, and reggae to punk rock and afrobeat), ran up to his apartment and brought back an Everclear CD. "Everclear?" I thought, "Geez, I knew we'd have a miscue at some point, but Everclear?!?" As it turns out, he had one particular song in mind. It was "AM Radio," the lyrics of which pretty much mirrored everything that I'd been ranting about. The song starts with L.A. boss radio mainstay KHJ's station ID, then sequeys into a tinny sample from Jean Knight's "Mr. Big Stuff", a groove familiar to anyone who grew up in that era. Right about then it kicks in, and I'm thinking that I can be proven wrong about just about any artist. (I should add here that on this same night, my neighbor told me about the exact moment when his dad's copy of John Coltrane's "A Love Supreme" opened his ears to jazz. So, yeah, he was someone whose taste I implicitly trusted.)

An important marketing tool for "boss radio", was the weekly surveys. The surveys (or hit lists) from that era were invaluable to a young persons rock n' roll education. Before we bought records and had liner notes to dissect, they provided the song titles and artists names, to songs that would feed our nostaglia jones years later. They were handed out at record stores, and other places kids would hang out (i.e. the newly opened Speedee Marts, before the name was changed to "7-Eleven"), and were a size handy enough to keep in your pocket for the duration of the week. One look at them now will tell you why a lot of old farts have pretty varied tastes. One random list, from 1971, includes the Stones, Marvin Gaye, Jerry Reed, the Osmonds, the Doors, Joe Cocker, the Partridge Family, Buddy Miles and a couple even I don't remember, Fuzz and Tin Tin.

It's kind of mind blowing to think back about the era of AM radio and how far things have come: the beginning of the album oriented FM format, the death of 8-track tapes, then the death of vinyl and cassettes, the advent of MTV, CDs, mp3s, and more recently, the resurgence of vinyl. You can now carry around a years worth of "top 30" hits in a doohickey the size of a credit card. But no matter what sort of fancy song-matching software they throw at you, you'll never be able to plug in the Stones and have it respond "You might also like Jerry Reed."

SEE YOU ON THE COUCH 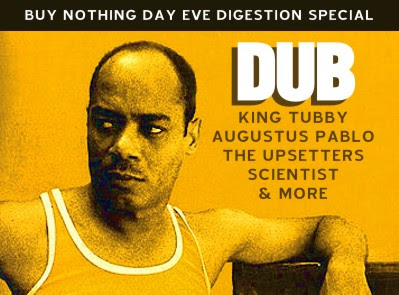 Here's a good selection of dub. Dub aids digestion when prone on a couch, semi-comatose from a tryptophan overload. It's also great for making plans on how to spend all the time you'll free up by not shopping or buying anything for one day. Friday is Buy Nothing Day, which I highly endorse. How many days can you celebrate by not doing anything? 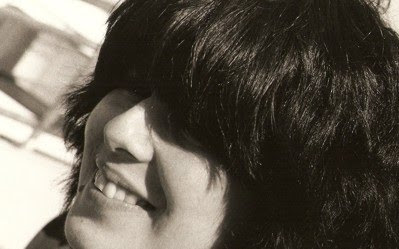 There is no easy way to say it. Evie Bibo, one of San Diego's original punk rockers, has passed away. She died of a brain aneurysm, by all accounts suddenly. She was a rare individual who dearly loved rock n' roll (and classic films), yet made it all seem like curtains around the real show, friendship. She was a sweetheart, all substance, no bullshit. Never saw her angry. Ever.

We go way back. She was, at different times, a fellow fan, a roommate, and the object of a crush. But most of all, she was a friend. With all the shared tastes and in-jokes that real friendship implies. I'd lost touch with her, and had just recently reconnected via Facebook. It was enough for me to know that she seemed healthy and happy. Though sad as that sounds, I know that she felt the same way. I knew our paths would cross again at some point.

She was ultra cool. And I mean that as a fan of a friend. It is a rare thing, to be cool without swagger, but she was. If she dug something, you checked it out, because she was always dead on. I think of her everytime I see a listing for "It's a Wonderful Life," and I think of her everytime I hear Johnny Thunders. During my crush phase, I made her a little stuffed doll of a "Too Much, Too Soon" era-Johnny Thunders. During the roommate phase, she turned me on to the Heartbreakers. So I had to post these songs, not of any lyrical relevance, but because they were something we shared. They're cool. But even Thunders couldn't do it without swagger. Evie could.

LAST CHANCE TO GET BUSY

For the first few years "Harlem Nocturne" had been in my record collection, it was just a cool instrumental. Part film noir soundtrack, part slowed down burlesque, it had one of those uncommon vibes that transgresses tastes. That was before there was a story attached to it.
.
I don't even remember who it was who told me the special significance the song held for them. I do remember that it was someone older, who had been at high school dances in the sixties. Though I've known a bunch of rock n' roll elders/mentors over the years, I can narrow it down to someone I knew in the late 70's or early 80's. So, I'll tip my hat to all the likely candidates: Harold Gee, Rick Fortune, Pat Looby, Frank Gutch and Michael Page. Every one of those guys shared valuable "I was there" rock n' roll stories with me, and I could write entire posts on the significance of each of their shared memories. Suffice it to say, they were all like big brothers and are allowed the huge respect that comes with that. 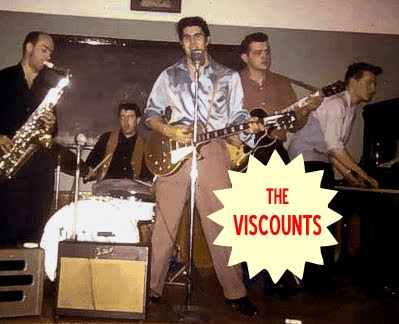 All I remember is being somewhere, a party or a barbeque, when the Viscounts version of "Harlem Nocturne" was being played. In shit-shooting mode, mysto-elder (whoever he was) said that he had always loved that song, because so many bands had played it as their last song at high school dances. Before I could ask why, he told me that when the chaperons signaled to the bands that they had one more song to play, they invariably picked "Harlem Nocturne," because it was a slow dance favorite. To be more specific, it was a proven make out, grab ass inducing, no-brainer, and selected primarily because the band wouldn't get shut down, and the students wouldn't get kicked out, during the last song of the night. It was like sticking it to the teacher, and getting down with your girl, in one fell swoop.
.
Years later, when I was pulling records to DJ, I came across the 45, and it became the last song I would play whenever I was spinning at the Pink Panther. Though it was in a different context, the song now reminds me of people slowly filing out of the smokey bar, smelling of beer and cigarettes, chaperons absent, to go home and finish the job.
.
The Viscounts - Harlem Nocturne mp3 at WFMU's Beware of the Blog
42 other versions of Harlem Nocturne at Beware of the Blog
Posted by Tom G. at 7:53 PM 1 comment: 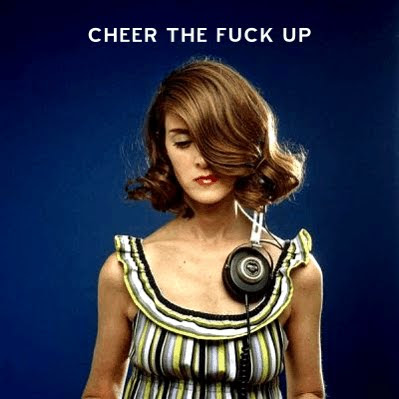 I'm not a pop nut. One per mix, tops. Feels a little wussy a lot of the time. I'm talking classic pop, too. Spector, Bacharach, Abba, the Rasberries, the whole lot of them. It wears on my sourpuss side. But, when you're in a sourpuss mood, things are getting you down, the weight of the world is on your shoulders, and the fucking Yankees have just won the World Series, just remember, it's all just bullshit. All of it. Even your sacred serious music.
.
These suckers sound like Fresca tastes:
The Bees - Chicken Payback mp3
April March - Chick Habit mp3
Persephone's Bees - Nice Day mp3
Posted by Tom G. at 7:58 PM No comments: