In the years preceeding Marleymania, more than a few reggae recommendations came stateside from UK punk rockers (via the music press), and additional exploration quickly spread through their US counterparts. But before all that, the soundtrack to The Harder They Come had already introduced reggae neophytes to the Maytals, the Slickers, the Heptones, Scotty, Jimmy Cliff and others. And, in hindsight, by featuring multiple artists it was a far better set of training wheels than any single artist, Bob Marley or otherwise, could provide.
.
Chris Blackwell fucked that right up. The first release on his Island Records had been Millie Small's My Boy Lollipop. It became an unlikely hit, charting even the US. Convinced that Bob Marley could be the big international breakthrough artist he'd been waiting for, he took Marley's bare-bones Jamaican masters to England and laid overdubs of British session musicians over them. He then put the bank on Marley.
.
It was a move taken right out of UK's Trojan Records' playbook. Trojan had already made their mark a few years earlier, disinfecting scores of reggae songs to make them more palatable to English ears. But Trojan's approach wasn't nearly as narrow in scope, distributing promotion evenly among dozens of reggae artists.
.
If you grew up in the Marley era. or are otherwise on the fence about reggae, download these cuts and let them simmer. If the only reggae that you've really heard is Bob Marley, stop listening to Bob Marley. There's far more adventurous stuff out there.
..
Start From Scratch Reggae Starter Kit:
..
From The Harder They Come Soundtrack:
The Maytals - Pressure Drop MP3 [1]
The Slickers - Johnny Too Bad MP3 [2]
Scotty - Draw Your Brakes MP3 at [2]
.
Originals of songs covered famously by other bands:
Daddy Livingstone -A Message to You Rudie MP3 (covered by the Specials) [2]
Willie Williams - Armagideon Time MP3 (covered by the Clash) [2]
The Paragons - The Tide is High MP3 (covered bt Blondie) [2]
Junior Murvin - Police and Thieves MP3 (covered by the Clash)[2].
.
BONUS: An excellent Trojan cut:
The Pioneers - Papa Was a Rolling Stone MP3 [3]
.
MP3 Hosts:
1. The Late Greats
2. Snuhthing/Anything
3. Feed Me Good Tunes
Posted by Tom G. at 12:55 PM 1 comment:

If their bio on Subpop's site is to be believed, Pissed Jeans are office zombies by day, wild men by night. It goes on about the "straight" world they inhabit during the day (one as an insurance claims adjuster another as an account manager), inferring that their co-workers are clueless about their night job as a band. Whether or not it was even relevant, but intrigued by their anti-social band name, I skipped right to the download.
.
It's a pretty mean racket. Imagine My War-era Greg Ginn (playing uncharacteristically sloppy), sitting in with Flipper, with Darby Crash singing. Derivative as hell, but considering that the source material is a few decades old, and that they do seem to have a good grasp on it, you have to give the the benefit of the doubt. After all, even if only for this one song, they made dirty noisy sloppy post-hardcore sludge that begs to be played loud. And it sticks in your head. That is a good thing. They should quit their day jobs.
.
Pissed Jeans - I've Still Got You (Ice Cream) MP3
Pissed Jeans rather lame band web page
Pissed Jeans' page at Subpop
Interview @ Blastitude.com
Posted by Tom G. at 6:58 PM 1 comment:

WHAT WE DO WAS SECRET 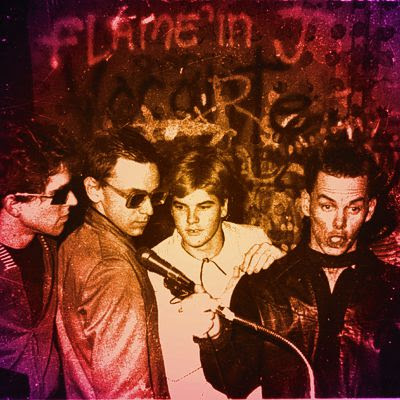 The context in which the 77-78 era of California punk rock is experienced is everything. A lot of online sources get things a little skewed, some do a little research and get it right, and some "I was there" sites give interesting first-hand accounts.

One thing that needs to be remembered is, first and foremost, it was an full-on DIY phenomenon. People with little or no experience put out records and fanzines, and they were every bit as essential to the scenes as the bands were. There were no web pages, no MySpace, no Pro Tools, no mp3's or YouTube. Just scrappy kids that couldn't take the crap they were being fed any longer. Take DIY out of the equation, add thirty years and try not to choke on the words "punk's not dead."

Compilations of Dangerhouse bands (and two Weirdos comps) are available at Frontier Records.
Recommended reading: "We Got the Neutron Bomb" by Brendan Mullen and Mark Spitz
Posted by Tom G. at 7:54 AM 4 comments:

It Belongs to Us Dickweed

Fuck it, even George Bush isn't going to screw me out of this one.

Some music gets me off in a completely different way than music I listen to day in and day out. It's like hog dogs on a stick, or fried chicken: I absolutely love them, but indulging more than a couple times a year isn't a good idea. They're treats.

Circus music is like that. The San Diego State Aztec Fight Song is like that (don't ask, I've have no clue. I didn't even go to school there). Sky Saxon's voice is kind of like that. And, once a year, Stars and Stripes Forever by John Phllip Sousa is like that. I don't know why. It's one weird quirk.

I'm not going to let George Bush take that away.

Stars and Stripes Forever at Call Me Classical
Posted by Tom G. at 8:02 PM No comments:

Have a seat George... 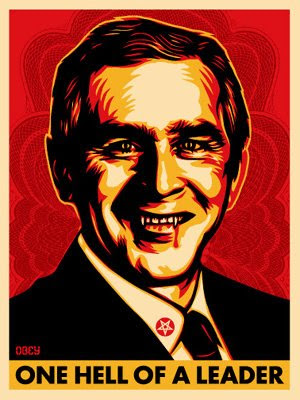 "George, it's never a happy occasion to have these talks, and I think you know what's coming. We've given you every opportunity to improve your attitude, and your work habits. We've reminded you of your job description and let you know over and over again what we expect from you. We've had this talk repeatedly and things don't seem to be improving and, frankly, we don't think they will. It's never easy when it comes to this but, George, we feel it's best that you part company with us, find another position that would be more suited to your range of skills. We wish you the best of luck with whatever you choose to do at your next place of employment."
.
Enough is enough.
.
Links:
Let's Impeach the President by Neil Young at Inflight At Night
I Accuse You Mr. Bush by Keith Olbermann text at CommonDreams.org
I Accuse You Mr. Bush video commentary at MSNBC.com
Illustration by Shepard Fairey
Posted by Tom G. at 12:48 PM No comments: