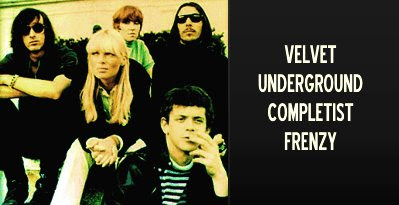 V.U. fiends have been going ape in the past couple of weeks over a previously unreleased live recording of the band. The only available live recording available from 1967, it contains an unreleased song, "I'm Not a Young Man Anymore," not available anywhere else, and the debut live performance of "Sister Ray", (known in these parts as "Nico's Piss Break"). The sound's not bad, particularly for a bootleg of a show that old. If you're a Velvets freak, you're not even reading this; you've already skipped out to download and dissect it. Me, I don't need everything. I'll just listen to "I'm Not a Young Man Anymore" and try not think too hard about about the incredibly insightful lyrics.
.
The Velvet Underground - I'm Not a Young Man Anymore mp3 and the whole The Velvet Underground Live at the Gymnasium NYC enchilada at Dead Flowers.
Posted by Tom G. at 10:11 PM No comments:

IT'S OKAY, MY BROTHER FOUND ME ANOTHER COPY.

I know, I know. A lot of these posts end up being more about my musical experiences than the nuts-and-bolts artist profile type post. A big reason for that is that when I think of music I know, it invariably takes me back to different significant moments when the music in question was either the soundtrack of, or related to, a particular event or discussion. In this case, the memory machine stopped on the day David Fwelling dropped my copy of Ginger Baker's Stratavarious in 12th grade. I was bummed, really bummed.
.
Ginger Baker was the former drummer of Blind Faith and Cream, and was the Gene Krupa of that era. While Keith Moon, John Bonham and other drummers were better known, Baker was a drummer's drummer. That's why I'd loaned the album to Fwelling. He was a drummer, and Baker was one of his idols.
.
As luck would have it, when Fwelling was returning the LP, in the last seconds of his possesion, the record slipped out and fell to the ground, breaking out a big hunk. Had this been just an ordinary Ginger Baker solo album, it would have been no big deal. But it wasn't. Ginger Baker recorded Stratavarious with Fela Ransome-Kuti, who was, unbeknownst to me at the time, somewhat of a deity in Nigeria, far and away the most popular afrobeat musician of his time (and an enemy of the government). At the time Stratavarious represented my only link to the exotic ethnic sounds of other lands, period.
.
My brothers and I had already gone back as far as Chuck Berry, Eddie Cochran, Muddy Waters, and Howling Wolf in our exploration of American roots, so we were already on our way to geekdom. But Fela's music was the tip of a different iceberg, this one fucking huge. It was our first glimpse into music that wasn't directly related to rock and roll. And the album wasn't easily replaced. I'd bought it a couple years earlier and it had long since disappeared from record stores. (This was before record stores had "International Music" sections.) So I did what any budding music geek would do. I lugged my broken record back home where the three cuts still playable were preserved, sandwiched between sentries Bad Company and the Beach Boys in my third of the collective record collection. (Ten years later my brother found another copy and gave it to me as an present, unconnected to any holiday or event.) 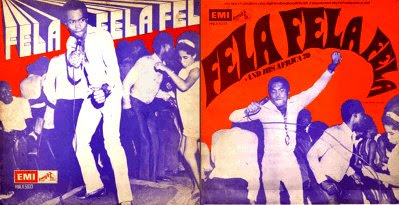 So what about Fela? He spent some time in the US in the late 60's, where he was inspired by the Black Panthers and the Black Power movement. Soon after, he was deported and returned to Nigeria, bringing with him a new direction. He created his own compound that included a commune, a disco and a recording studio, took 27 wives and proclaimed his independence from the Nigerian state, which ultimately landed him on the government's shit list. A flagrant pothead, in 1974 Nigerian police planted a joint in his home to have an excuse to drag his ass in for a time-out. He ate the joint, thereby destroying the evidence. As if a scene from a Pink Panther movie, they brought him in anyway, to wait for the joint to pass. In the interim, he acquired a stool from another inmate, presented the joint-free duty, and was later released. Thumbing his nose at the authorities, he wrote a song about the incident, naming it, poignantly, "Expensive Shit."
.
Dig it: Six cuts of Fela at Passion of the Weiss. Considering that his songs typically hover in the ten minute range, that's a load of excellent music. You might also want to check out the article from the NY Times (linked below) by John Barton, a former Times Lagos correspondent and friend of Fela's. Amongst other revelations is that Idi Amin was one of his early idols.
.
Fela Kuti - Expensive Shit mp3 and other delights at Passion of the Weiss
How Fela Landed Me In Jail by John Barton at the New York Times
Posted by Tom G. at 4:10 PM 1 comment:

THIS WILL NOT BE MY LAST CHESS RECORDS POST.

There's far too much in the history of Chess Records to even entertain the thought of writing a short blurb worthy. In a nutshell, they just plain kicked ass. They've got to be in the top three rock n' roll related labels of all time. Like Sun and Stax, their roster was stellar and crossed multiple genres. Muddy Waters, Chuck Berry, Howlin' Wolf, Sonny Boy Williamson, and John Lee Hooker, just to name a few. But you knew that (you'd better have).
.
One of the most under-appreciated Chess alum is singer, writer and bass player, Willie Dixon. His contribution to rock n' roll, and Chicago blues, cannot be overstated. Beyond backing practically all of his big name labelmates, the songs Dixon wrote transcended Chess and have been played by every single rock band that ever existed (times infinity).
.
This one, a duet with Koko Taylor, gives me goosebumps. It starts out slow, with an sparse, eery introduction. The arrangement and instrumentation just drip despair. Then, Dixon's low bellow slowly trods to a pause, just before Taylor's first verse. When she starts to wail (at 1:15 in the song), you will be committed. This is not an ordinary blues song.
.
Wille Dixon and Koko Taylor - Insane Asylum mp3 and 20+ other songs about mental instability at Beware of the Blog
The Chess Story & Discography at Both Sides Now
Posted by Tom G. at 7:43 PM No comments:

DON'T PUT THAT MOP AWAY JUST YET.

I know what you're thinking: I've heard that song a zillion times. How can someone top all of the other versions, including those made by every goddamn blues musician that ever dusted a stage? Good question, thank you very much for asking. It's a rare occasion when a woman sacrifices her larynx, and that's just what Joyce Harris does with the song that you thought you'd heard enough of. I am certain that, with pipes like hers, no man would stand a chance in a domestic dispute.
.
Kudos to Locust St for writing "The track opens with a summoning, a howled note Harris holds until she shreds her voice to pieces." Voice shredding has always been one of my favorite things to listen to, particularly because it can elevate a blues standard to a beer-spilling, living room trashing, turntable pipe bomb.
.
Joyce Harris - I Got My Mojo Working mp3 + 2 others at Locust Street
Joyce Harris bio & interview at Color Radio
Posted by Tom G. at 10:41 AM 1 comment: