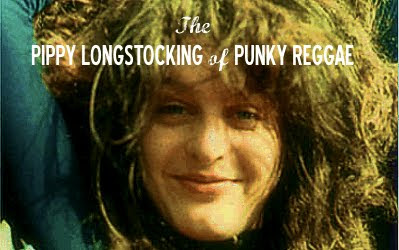 Though it's been thirty years since the first Slits LP Cut, there's no mistaking the voice and the phrasing on the song "Ask Ma" from the upcoming Trapped Animal. Even if the sound isn't as all together organic as the first album (who can follow up using dropped silverware as a rhythm?), and there is more than a touch of electronically produced sounds, the feel (from the one song I've heard, at least) is still full-on Slits. And, surprisingly, even with all the time that has passed, it isn't as removed from the early work as you'd expect. But there's no mistaking that it is an update, and not a reunion.

It's comforting that Ari Up, punky reggae's Pippy Longstocking, hasn't changed much since the early days of the Slits. She exudes all of the characteristics of being comfortable in one's own skin. (And if it works, why change it, right?) Turns out, even with constant moving around, living in jungles and becoming a mother, she's still the same gangly wide-eyed girl she's always been. She's like the six year old that rides up on their bike while you're working on your car and says "Whatcha doing?" Without an ounce of fanboy (too old for that anyways), I have to say, I really missed her.
.
The Slits - Ask Ma mp3 at LimeWire
The Slits - The World of Grown-Ups (Live 2008) mp3 at Pitchfork
The Slits - I Heard It Through the Grapevine mp3 at One Sweet Song
Ari Up's bio, in her own words, at Pitchfork
The Slits on MySpace (w/semi-recent videos)
Posted by Tom G. at 5:42 PM No comments:

For every studio with it's own distinct sound, there are marginally known session players who created the sound, and could arguably lay claim to it. Studio One, Coxsone Dodd's Kingston studio and label, was no exception. It was so instrumental in the development of reggae that it could (and should) easily be compared to Sun or Stax, in terms of importance to it's respective genre. And keyboard whizz Jackie Mittoo, still in his teens when he began working for Dodd in 1959, was right there when reggae was born. It was his bubbly organ that punctuated the tracks of just about every major reggae artist in the early sixties.
.
As important as his organ was to the development of Studio One's sound, his solo output leans toward a reggae-fied version of Booker T & the MG's. So much so that his cover of "Hang 'em High" sounds more like a cover of Booker T's version than the original. It's as though he never heard the Ennio Morricone original (which he had to have, because spaghetti westerns were huge in Jamaica.) Whatever version he is covering, the bass/organ thing in his is a massive groove thing.
.
Jackie Mittoo - Hang 'em High mp3 at Passion of the Weiss
Jackie Mittoo - Grand Funk mp3 at Passion of the Weiss
Jackie Mittoo - Black Organ mp3 at Passion of the Weiss
Jackie Mittoo - Ghetto Organ mp3 at 8106
Jackie Mittoo - Soul Bird mp3 (vocal!) at Light in the Attic
Jackie Mittoo bio at Reggae Train
Jackie Mittoo at Wikipedia
Posted by Tom G. at 10:00 AM No comments:

THE GIRL FROM IPANEMA IS STONED 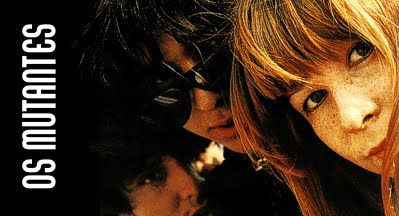 Left of center? Check. From another country? Check. Mellow? Wait,...what? Ah, what the hell, I can do mellow two days in a row. "Unprecedented: day two of mellow." (Enjoy it while you can.)
.
What is this? Brazillian tropicalia-psych-pop? I guess. Probably need a few more hyphens to accurately describe Os Mutantes. Everybody tries to, I don't really care. It just sounds good. In Wax Poetics, head Mutante Sergio Diaz cited Rubber Soul, Revolver, Their Satanic Majesties Request, Duane Eddy, Les Paul, Sly & the Family Stone, Jimmy Smith, Nat King Cole, the Everlys, and the Ventures, along with some Brazillian names (you probably wouldn't recognize anyways) as influences. But that doesn't really narrow it down, does it?
.
They have a new album out. It's quite a big deal to a lot of folks, because it's their first in over thirty years. Seriously, hipsters of all ages are gonna be drooling all over this one, especially on vinyl. It's that kind of record. Good thing they recently reissued their back catalog too, because that's what level two hipsters will jump for. But it's good. Left of center and, albeit mellow, just weird enough to plug a few mix holes.
.
Os Mutantes - Teclar mp3 at Melophobe
Os Mutantes - Anagrama mp3 at Pop Tarts Suck Toasted
Os Mutantes - Neurociencia Do Amor mp3 at Babylon Noise
Older stuff:
Os Mutantes - Baby mp3 at Choir Croak Out Them Goodies
Os Mutantes - Panis Et Circenses mp3 at Choir Croak Out Them Goodies
Os Mutantes Official web site:
Mutantes.com
Posted by Tom G. at 8:55 PM No comments: 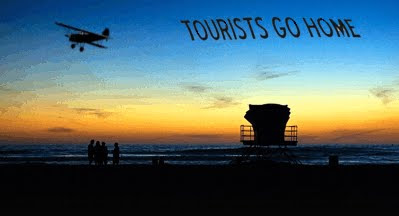 What is typically seen as the last day of summer, is commonly know in these parts as the day before the day we get our beach back. Gone are the people from Arizona. Gone are the inexperienced surfers and boogie boarders crowding the line-ups. Gone are the long lines at Hodad's, blocking the entrance to Newport Farms. Gone are those who wear flip flops in the sand, blast boom boxes playing classic rock, and leave shit everywhere in their trail. I don't hate these people. I just hope the door does hit them on the way out.
For another month or two, there will be pleasant days and warm-enough water. And fewer people. Starting tomorrow, the day after Labor day, things return to normal (or normal for Ocean Beach anyways). The locals will still be here. The Guitar Man will still be on his rock playing the same crappy two chords that he's been playing for the past fifteen years. The guy that brings his iguana to the beach (whom he calls Elvis but everybody else refers to as "wishes it was a chick magnet") will still be here. John, the homeless guy in the wheel chair, will still be at the foot of Newport. Boston James may or may not return, depending on if they charge him with Jimbo's death (after the two had a drunken brawl). But there will be pleasant days and warm-enough water. Now, it's the locals turn to chill. And these three songs are about as chill as I get.

THIS JUST IN: It wasn't more than a couple hours after I posted the above blurb that I ran into a guy name Tim, who used to drink with Jimbo and Boston James down at the beach. I hadn't seen him for a couple years (since alcohol was banned at the beach), so I asked him if he had heard about Jimbo dying. He answered that he had, and then told me that Big Bill (known to the kids at the beach as "Mad Dog") was up the street, outside the liquor store (aka Newport Farms, which, despite it's name, sells only fermented produce). I asked if he was sure if it was Bill, because he disappeared a couple years ago. "I know," he said, "everybody thought Bill was dead. I did too." So, it was, of course, my civic duty to welcome Bill back from wherever he'd been. On my way home, I stopped by to see him. He'd been in and out of hospitals, and just recently kicked out of a convalescent home. He is now back on the street, and already dialed in to the comings and goings of that ol' gang of his. He had heard about Jimbo, and told me that Boston James, though not charged with Jimbo's death, is now banned from the streets of O.B.. So that's your local update. Jimbo's dead, Boston James is banned and Big Bill is back. And the water is still warm enough....
Posted by Tom G. at 2:07 PM 5 comments: