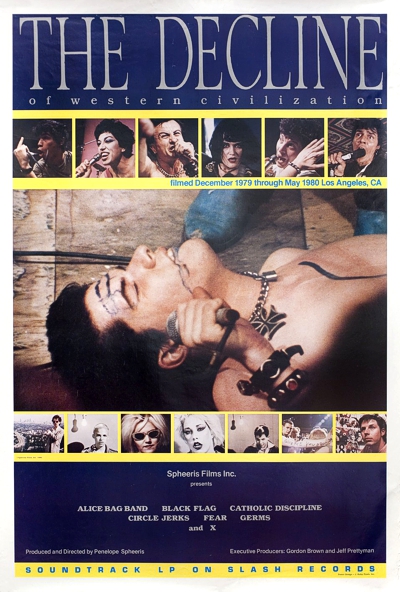 It's getting boring. Staying at home doesn't have to mean sitting in front of a screen. Read a book. Listen to music. Read liner notes. Make art. Do a fanzine about being bored at home (actually, that's a good idea). I'll try to give it a rest after this one. The Decline of Western Civilization is an early documentary of the L.A. punk scene, late 1979 - 1980, when the scene was pretty much past it it's anything goes peak. Patterns, copy cats and stereotypes abound. The most clichéd part of it is the spitting at Lee Ving during the segment on Fear. And then a leather clad chick with spiky hair jumps on stage and starts a fracas with him. (at around 1:29:01) Microscopic factoid: I knew that women, me and my roommates were watching her kid back in San Diego when she was at that show. Her name was Tracy and her boyfriend was a guy named John Vomit. Also in the crowd in that scene is Lou Skum, singer of the Injections and another roommate at the time. And there's a couple sightings of Chico Tony a super nice guy. Back in San Diego he got kicked in the Adam's apple in a pit and had to have a tracheotomy. Oh, and another factoid: Billy Zoom, the guitarist in X (the band appears in "Decline"), was a rockabilly guy just a few years earlier and recorded for Ronny Weiser's Rollin' Rock record label (see song on yesterday's post). Anywho, here's the flick. Another one you would rarely see online just a few years ago.