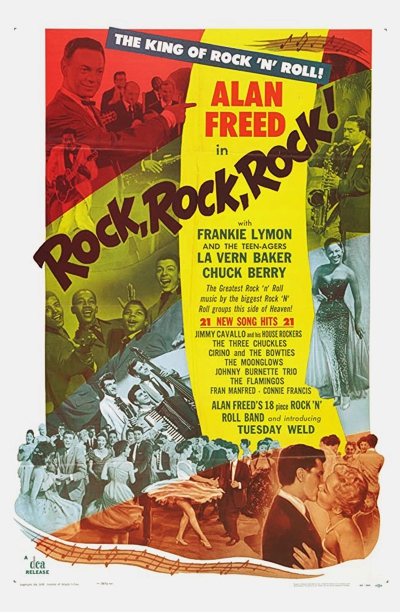 You know when I said that I'd cut out the posting of movies? I lied. Not entirely. I just forgot I'd bookmarked Rock, Rock, Rock! the 1957 rock-sploitation flick with clips of Chuck Berry, Johnny Burnette and the Rock 'n' Roll Trio, and LaVern Baker. Spoiler alert: Rock 'n' roll does not die. Considering I haven't even watched the whole thing and don't know what the plot is, that's still a safe assumption. I've watched enough of it to see that it's not far off from the other early rock 'n' roll movies. You get a couple bona fide rockers, a solo female singer and a couple doo wop groups, throw in a dash of an elder pro-rock 'n' roll suit (businessman, MC or promoter) and a pretty young woman in the starring or co-starring role, and put at least one "rock" or "shake" in the title. Voila! Still, a relative hoot. As a bonus, links to three posts, one for each Baker, Burnette and Berry (Note: some of the Berry mp3 links are dead but there are at least five that are still good. Hunt and peck rock.)

I watched this a couple of years ago, and it was horrible -- except for the music performances which made it totally worthwhile.