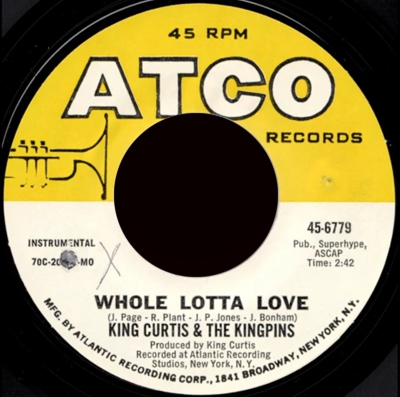 I had "Whole Lotta Love" on the brain from the other night. Having posted a King Curtis song on the last post, it was his version that I'd been thinking about. I meant to revisit it. Then today I ran into a version of Tina Turner doing it. It's actually pretty good. I gotta say though, I did fast forward throughout her version the first time I listened to it just to hear if it kicked in, like the Ike and Tina version of "Proud Mary". Never happened though. Her version of "Whole Lotta Love" is five and a half minutes long and sounds like a version a very stoned person would enjoy. Very Isaac Hayes sexy slow funk. I, not being stoned, noticed that it had a reggae vibe to it, what with the empty space. That's why I like it. That and her singing. Her vocals do strange things to me on this one.

I kind of poked around looking for a reggae version and ran into one by Alpha Blondy. A little too show biz for me. I probably should have listened first before watching the video, which really is the show bizzy part of it. Onto another reggae version, one by an outfit called the Dynamics. Theirs, turns out, wasn't all that bad. I checked further and it's from an album of theirs that's all reggae covers. After a pause to roll my eyes, I saw that they also covered Herbie Hancock's "Rockit". My first thought was, "Man, this has gotta suck." It did not. It almost sounded like something Jerry Dammers and and his Spatial whatever would do.