HOP WILSON. ME NEITHER. 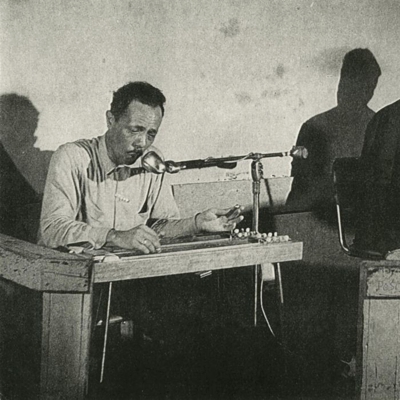 Sometimes a cool photo will suck you in. That's what happened here. The above image, Hop Wilson. Never heard of him but the photo intrigued me. First stop was YouTube. Seeing that photo, I'm thinking early country and western, pedal steel. Nope. Blues, and upon closer inspection it's a lap steel on a stand. After listening to a couple, the verdict: the sound is good, it's raw, it's different and it's worth hearing. Some of the licks are almost like Hawaiian style lap steel playing. A little looser then the blues slide guitar you're used to hearing. That alone is reason enough, just to hear a different approach. Truth be known, I would have found any excuse to post a proto-shakers type instrumental by a band called Hop Wilson and His Chickens.

Note: Finding mp3s on blogs is getting harder these days, so you'll have to do with some YouTube versions. Myself, I aim to go buy some of Wilson's stuff, which reminds me to plug the record sellers at Discogs. I don't know about you but I try to avoid the big guys like Amazon. Discogs not only has all the credits for different releases but also has has record dealers offering most of them for sale, which is handy. Sometimes the prices will vary wildly with some dealers charging reasonable prices and others trying to take advantage of people willing to pay any price, whether or not a record is all that scarce or collectable. In Wilson's case you can get 45s (pricey) but there are compilations priced like regular used LPs (around twenty bucks).