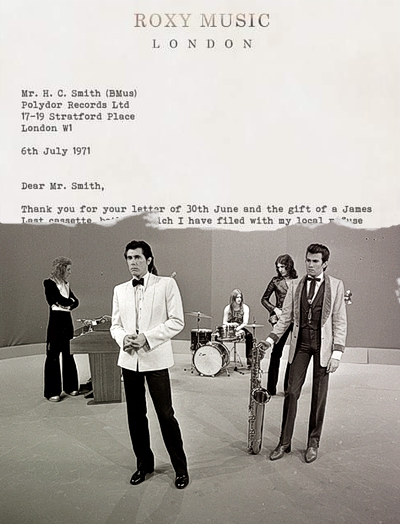 There's a letter making the rounds online. An alleged rejection letter sent to Bryan Ferry and Roxy Music from Polydor Records. I say alleged because it's been posted a lot in the past twenty four hours. Yesterday was April 1st, April Fools Day. I normally wouldn't regard it as fake, because I couldn't care less one way or another. But in looking for a high resolution version, I ran into an alleged response from Bryan Ferry. There is a line in the response that make me think both are jokes.

"If you really must, at least make sure it's on a REAL Polydor letterhead, you thick twat, otherwise I might think it's another late April Fool." Scans of both letters can be seen here.

Like I said, I really don't give a shit. It's just a good excuse to post some Roxy Music stuff. This way....