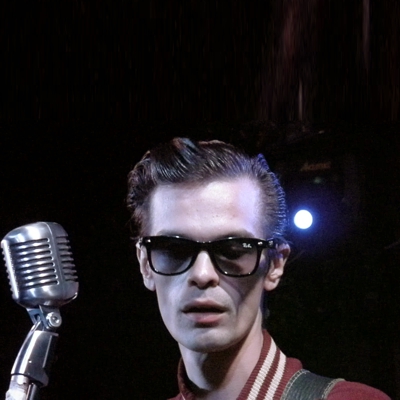 Aw shit. Dan Sartain has died. It happened a few weeks ago but I just heard about it. He was only 39. This one hits me a little harder than most musician deaths. I didn't know him, and although I really love his music, not to the point of running out and buying everything. That said, there's a couple things that make me stop and reflect. One is the circumstances of how I came to know his music. Many years ago, I was working as a grunt on a job site. The mason on the job needed someone (me) to clean the old mortar on the bricks so they could be re-used (it was a historical building). A few months later I was in my local watering hole, and I ran into the mason. When I asked how he ended up there he told me his daughter was one of the bartenders. After having met her, I soon met her boyfriend, John Reis, guitarist and singer for Rocket From the Crypt.

A few years later Reis started his own label, Swami Records. As I'd found out after getting to know him, we had similar tastes in music. Any friend that has a record label and has similar tastes also has my attention. One after another I road tested the artists on the Swami roster.

When I got to Sartain, I realized that this Sartain guy was the type of person I'd like to have a beer with. (Oh, that table would be crowded. Also sitting there, Ted Williams, Miki Dora, John Steinbeck, Hasil Adkins, Raymond Chandler, Dick Dale,..yeah, you know, the regular drinking buddies. "Hey, who let Duchamp in here?!? Get 'im a drink, would you Picasso?") After seeing a couple interviews, Sartain kind of reminded me of my brother in his self-effacing sort of humor and acute bullshit detector. To wit, of Jack White he said "He was a fucking dick. That man is uncool." How succinct are you going to get? Even if the subject was someone else, those two sentences are pure poetry. Then there's the Hasil Adkins question. Asked what his favorite Hasil Adkins song is, his answer would have been my brother's exact words,"'No More Hot Dogs,' stupid! What the fuck else would I choose?"

Apparently since he had slicked back hair and favored hollow bodies, he was assumed to be rockabilly by some, and about that he referred to the rockabilly crowd as fantasy driven, "picking their teeth with swithblades" and here's the kicker "like MC Hammer never happened." I laughed my ass off. That juxtaposition is hilarious.

There are other reasons why he's seated with the other heavy hitters. He's worked regular jobs, delivered pizza, worked in a record store and after touring big venues with the Hives and the White Stripes and releasing a few records, he took over a barber shop. Enough of the blabbing. Here's some of his music. If you like it you outta buy some. There's a digital compilation that contains all of his albums, one hundred songs, for twenty bucks at Bandcamp. Here's a few to sample. Do check the 46 minute film, Dan Sartain Lives: The Motion Picture, posted in 2014.