DODD AT THE CONTROLS 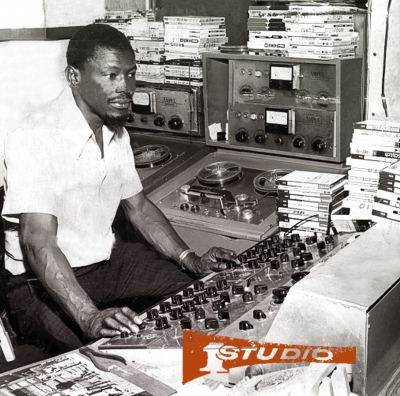 Ah, hell yeah. You could do a lot worse. Twenty two minutes of three extended mix 12"s, from the vaults of Studio One. That's the man above, Coxsone Dodd, who likely had nothing to do with these mixes. But it was his studio, his label, and at that time, early seventies, he was the absolute shit. Like a Phil Spector or Sam Phillips, but in reggae. I've posted Studio One stuff here many times. You may have noticed sometimes oddballs pop up in Dodd's discography. Though records coming out of Studio One were primarily reggae, even then there was some weird shit going on.

In the middle of this mix (below), there appears to be some sort of synth strings (or some other kind of keyboard that mimics strings) and there's some flute, giving it a sort of Blaxploitation soundtrack vibe, still with a reggae beat. I normally hate fake strings but if it was real strings on this it would just sound too polished, too fancy.