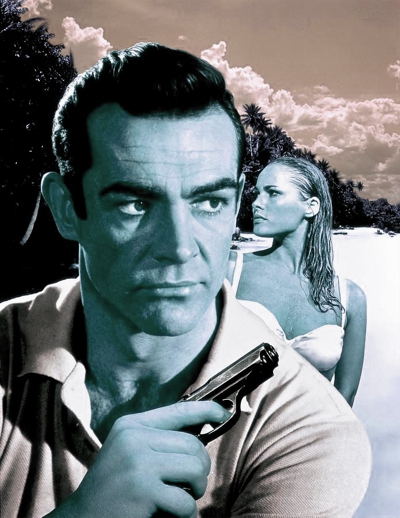 One of the cable stations (TCM) is showing James Bond movies on Thursday nights for the month of September. Last Thursday it was all early ones with Sean Connery. It was awesome being able to turn on the TV at any time over the course of eight hours and know that I'd be catching some vintage Bond. Next week they have the one with George Lazenby as Bond, then one more Sean Connery and then it's off to the Roger Moore era. I prefer the earliest, but as the movies progress, so do the stunts and special effects. They're still entertaining, but they lack the Connery cool.

The original James Bond theme by John Barry is all-time, particularly the guitar tone. It's always reminded me of someone like Billy Strange, but Strange was an American studio guitarist, and Barry was British so one would assume that he recorded in England. After hearing the song countless times over the years, it finally occurred to me in a Homer Simpson "Doh!" moment, Google the fucker. The answer: Vic Flick. Who? Here we go. While I'm out looking into this Flick character, here's a few Bond related things, including Barry's version, and a version that Billy Strange did do. I gotta say, Flick wins the guitar tone contest. This time.