THIS SAX PLAYER IS AT THE WRONG GIG 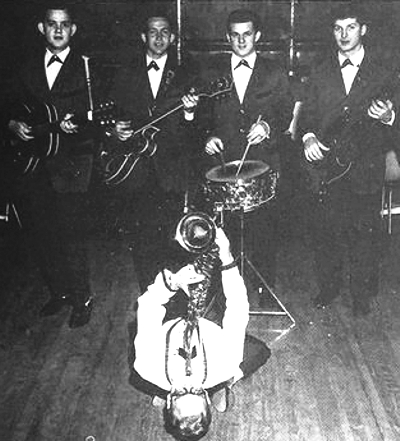 Last night I was out in the alley and the kid that lives across the alley was coming home from his karate class. He's about ten years old and a yellow belt, whatever the hell that means. He did what he always does, he starts asking questions. How old are you? Where do you work? Shit like that. After a half dozen of these volleys he asked a question that was so unrelated it was something you could easily find online. I just answered him "Google". Then he asked another unrelated but searchable question. I answered "Google". I should add, at this point, that the kid has a sense of humor and we razz each other all the time. So I wasn't being cruel or mean, I was teaching him how to use his fucking head. After a couple more questions I thought I'd make a point. I answered, "Google. You can find anything on there." With that, the Q & A ceased and we chatted about other alley subjects.

I thought about last nights episode just a couple hours ago. I ran into some great rockabilly cuts from a band I never heard of, the Sabres. I did a search using Duck Duck Go. (Google is actually a last resort for me. Too big.). I found links to the same songs I had already run into, but no bio anywhere, nothing more than a couple sentences. Reluctantly, I tried Google. Nearly identical results. I'm gonna have to go crawling back to that kid. "Hey, about the other night, I'm sorry, I was wrong. You can't find shit on Google!"