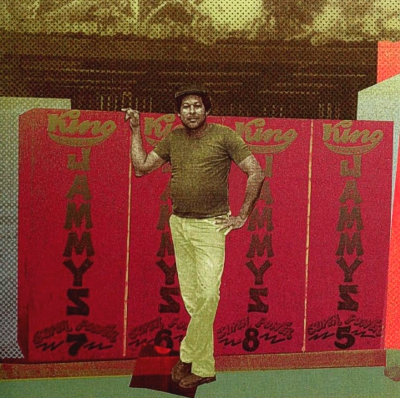 I've got a love/hate thing going on with King Jammy. He was a kind of assistant to King Tubby and then went out on his own, like Tubby, as an engineer and producer. Good credentials there. Back then he was Prince Jammy. How he was promoted to King, I've no clue. It didn't get passed from Tubby because he died in 1989 and from what I've been able to find, Jammy went from Prince to King sometime between 2011 and 2015. Who knows. His stuff as Prince Jammy was good, as well as his early years as King. He wasn't Tubby, no one was, but he was in top tier.

But, and it's a big but to me, he was the first to do the digital reggae. This was mid-eighties. I'm not against synthesizers or even digital effects if used sparingly, but crafting riddims without the use of instruments at all takes the soul out of it. Hence, dancehall. Fuck that. If the road's blocked, go the another direction. When digital reggae and dancehall came out, I returned to the side streets and went deeper into DJ, roots and rocksteady.

Here's a documentary on Jammy and a couple cuts from when he was Prince Jammy. There's also a link to a recording of his sound system at a yard dance from 1987. The sound quality on that is dubious, but it's at least a taste of the thing. Skip around, it's over two hours.
~ NOTE: ALL MEDIA IS HOSTED BY THE BLOGS & SITES NAMED BELOW ~
Listen:
Prince Jammy - Second Generation mp3 at Internet Archive
Prince Jammy - Prince Jammy On the Scene mp3 at Internet Archive
The sound system set:
King (?) Jammy's Super Power Sound System mp3 at Streamola Archive From a yard dance, Walkerman Lawn 1987
Posted by Tom G. at 9:07 PM

Hey, Tom! Long time, no comment... Was sifting through boxes of stuff the other day and by chance unearthed a poster I once drew for a friend of mine, both then and now a reggae fiend. Early nineties, in a brave (but somewhat futile) attempt at hepping the townsfolk of Bergen to de riddimz of Jameeka, he held a couple DJ nights at a local club, one of them advertized as "Inna Dancehall Style"... , looking at the poster now, I see that "KING JAMMY's" is among the artists listed. This was back in '91, so Prince J must have upgraded his royal title some time before that... Anyway; jus' contributing my 5 c's... (and saying hi) E.

PS. MC5 is packed and ready to go... just gotta complete the hassle of filling out the customs declaration form - shouldn't take more than an extra couple months :)

Hey e! Good to hear from you, even if it blows my Prince/King Jammy timeline out of the water!

Shit, I owe you a care package at this point!