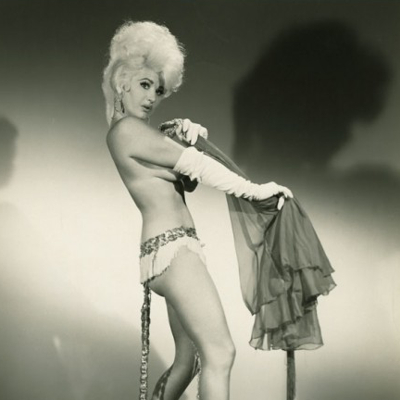 If you've been lurking for a while, you've no doubt run across one of the posts with "shakers", oddball instrumentals known by other terms as well. At first Beware of the Blog was referring to them as "Titty Shakers", then someone made the decision that "Tassel Twirlers" was less, er, coarse. Somehow the term evolved into simply "Shakers". What they are is basically the type of instrumentals you'd hear accompanying a strip show in the fifties or sixties. Cheesy shit, but totally cool once you let it take over. Imagine you're just sitting there, in a dark room. You've got a flat top, wing tips, with the cheapest goddamn after shave the store sells. You've got a pack of Pall Malls, and an ice cold Hamms condensating next to a half full plastic ashtray and there's some drunk jerk yelling "Go Baby Go!" as if it was the first time the missus let him off the leash. Here's the soundtrack.

These are typical of the oddballs you used to be able to pick up at thrift stores for pocket change. Now, due to demand from oddball collectors they're nearly impossible to find for a cheap price. The word is out, everything is listed online somewhere, banged up thrift store finds included. Just snag the mix, there's 34 of them. They really do put you in a weird mood after you've heard a few in a row.

~ NOTE: ALL MEDIA IS HOSTED BY THE BLOGS & SITES NAMED BELOW ~
Listen:
Hey Tiger! Do The Broken Hip! Kogar's Tassle Twirlers Volume 2 at Boss Radio 66 NOTE: The mix is at Mega.nz. Although there are buttons to sign in or create an account, it is not required. Takes about two minutes, a zip with 34 individual mp3s.
Posted by Tom G. at 8:55 PM