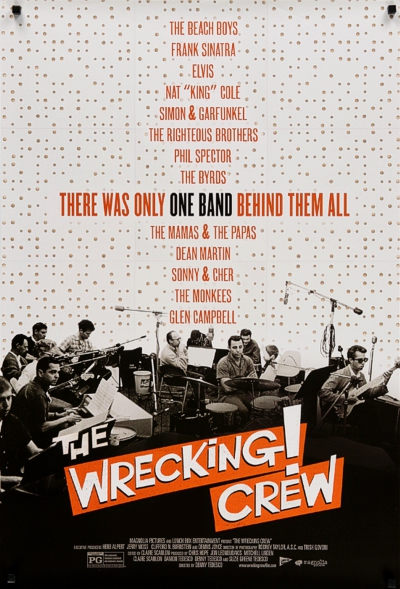 This is getting to be a regular Lock Down Theater Film Festival around here. I had been seeing a link pop up in the sidebar at YouTube for The Wrecking Crew but every time I did a search, a thousand other short Wrecking Crew links popped up. Finally found the full thing. It's a documentary about the West coast studio musicians who played one everybody's records. At different times they were Monkees, Turtles, Beach Boys, Paul Revere and the Raiders and Byrds. Fans had no idea...then.

I'm not sure that it was a well kept secret or if the buying public just eventually became more interested in who actually played on what. The cat may have been let out of the bag with drummer Hal Blaine's 1990 memoir. That's also where the debate began about what the studio musicians actually referred to themselves as. Some of them backed up Hal Blaine, agreeing that they used to refer to themselves as "The Wrecking Crew", but bassist Carol Kaye one of the most used musicians of the bunch (so she ought to know) said they called themselves "The Clique", It's possible that neither were widely used back in the day because people back then didn't try to brand the fuck out of everything.

The free full length version at YouTube has ads but you know what to do. Just let roll, hit the head and stop by the fridge on the way back.