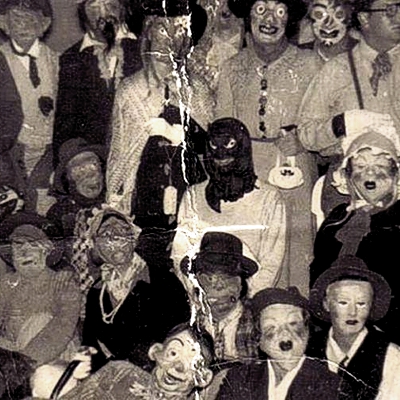 After seeing the photo above I realized something. It was so creepy I gave it some thought. You can buy whatever fancy expensive over the top Halloween costume you want and you wouldn't be half as scary as that menagerie of lame costumes. Man, if I ran across a mob like them I'd be scared shitless. Why was that? Was it because it's an old photo? Not really. Part of it is because all of their faces are covered. Part of it is that their costumes are so crudely put together. And part of it is because it just looks fucking scary.

Here's a link to a Halloween mix at Grey Haas. Haven't listened to it yet but I've heard others by her/him/it and they were good. Shit, I dunno...

~ NOTE: ALL MEDIA IS HOSTED BY THE BLOGS & SITES NAMED BELOW ~
Listen:
Trick or Treat Vol 7 mix at Grey Haus 25 songs most from the 60s. Click on "Grab it HERE"