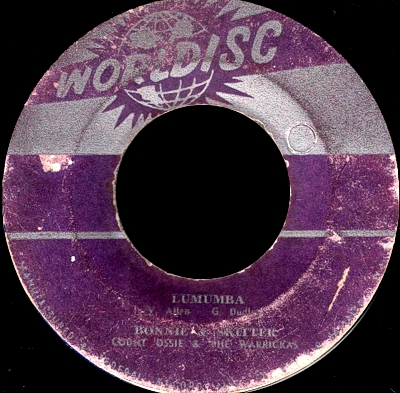 I've been listening to reggae for a long ass time, since my late teens. I'm a total sucker for anything that producer and label owner Coxsone Dodd was involved in. He was as instrumental in the sound and development of Jamaican music as it evolved from mento and  rhythm and blues to ska, rock steady and reggae. Here's the deal: I just heard one of his early releases today. It was "Lumumba" by Bunnie & Skitter released on Dodd's Worldisc label. It surprised the hell of of me when I found multiple sources that had the release date as 1960. For that era, it was heavy. Bare bones but heavy. Bass in your face. It does not sound like 1960. Something might be fucked up here.

The Cedric IM Brooks song is down there because it was at the same post. What the hell, it's a great song, from several years later but also a Dodd thing.

Yeah, I agree that it sounds more recent than 1960. The lyrics seem to reference the killing of (Patrice) Lumumba, which took place in 1961, so the record would have to be from at least that year, if not later.

P.S. At least I know my ears aren't screwed up. Thanks for doing the leg work Marc!