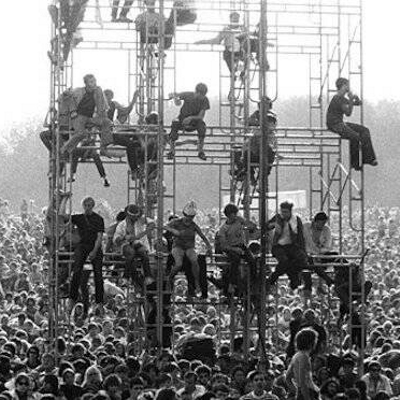 Here's something for you aging hippies and you kids curious about Gramp's wild years. A radio station will be playing the complete 1969 Woodstock Festival, all three days, exactly as it happened, exactly fifty years later. It will be available streaming so you can listen to it on your chosen gizmo.

What's the big deal, you ask? The movie has been out for decades, the soundtrack and second volume of the soundtrack have been out almost as long. There have been later expanded editions with music and artists not originally released with the first bunch. Well, here's the deal, until recently, the entire Woodstock roster had not been released. Believe me, I know. As a teen I loved Creedence Clearwater Revival, and Johnny Winter. I knew that they had played at Woodstock, but their sets weren't released because they never signed on. But their sets, and everyone else's, were recorded and put on the shelf. For decades. Apparently it took some time because "the shelf" was all over the place, some professionally recorded, some just soundboard tapes. It took some work to put is all together and clean up tapes with inferior sound (read about it here).  A week and a half ago Rhino Records released the whole sheebang, 38 CDs, in an edition of 1969 (cute, huh?). Not surprisingly, the boxed set sold out quickly, as in days. At $800 a pop, that amounts to a million and a half bucks. It's now selling on ebay for double the retail price. Take that, hippie.

So, this radio stream/broadcast maybe your only chance to hear the the whole thing. It starts at just a little after 5:00 PM, Eastern (U.S.) time, and plays for roughly six hours on Thursday, twelve hours on Friday and Saturday and another six hours on Sunday. 36 hours including 20 hours never released, 432 tracks, including stage announcements and acid warnings. Saturday looks like the best line up: Creedence Clearwater Revival, Janis Joplin, Sly & The Family Stone, The Who, Jefferson Airplane, Joe Cocker, Country Joe & The Fish (this would be the piss break), Ten Years After, and The Band. The schedule for all four days can be found at WXPN's website (linked below) and the complete song list at Rhino (also linked below). And don't do acid. That shit fries your brain. Getting muddy though, that shit's fun.