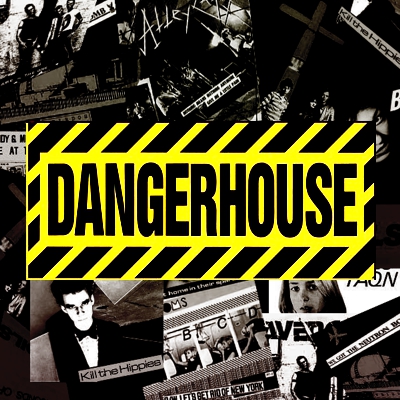 Driving today with a compilation of Dangerhouse singles blasting away, I was reminded what a great fucking label it was. They only released about thirteen or fourteen seven inchers, one compilation (that was on one side of a picture disc twelve inch) and one proper LP, Black Randy and the Metro Squad's Pass the Angel Dust, I Think I'm Bowie. What's so special about the label is that they put out seminal records by seminal bands. All but a couple of the discs are the best that any of the bands ever recorded, and just about all of them were released early, 1977 - 1979. In their discography, the first Avengers 45, the first X, second Dils, first Bags, first Alleycats, second Weirdos,...you get the picture: seminal. And it was a strictly DIY label. Some of the recordings were done in hotel rooms, the sleeves were folded paper, their distribution through mostly independent record stores. It is the label that best represents the early L.A. punk scene (though the Avengers were from San Francisco and Howard Werth, the odd non-punk release, was from the UK). The only questionable release, aside from Werth's, was from 2013 (!) an LP by a someone named Sienna Nanini, a release that someone in the comments on YouTube referred to as ABDL, which a search revealed means "Adult Baby/Diaper Lover". Yikes! Not my bag at all, and that's all I have to say about that.

So here's a mess of Dangerhouse stuff. The two mp3s down there are my two favorite, but there are others at Killed By Death (linked below). Another link with the story behind the label, and a complete discography, including the few reissues there have been, at Discogs. If you want to read up, I suggest We Got the Neutron Bomb by Brendan Mullen (owner of the Masque, an underground club active back then) and Marc Spitz. It's an oral history in chronological snippets by many of the main players.