HEY DAD, CAN I BORROW THE KEYS? 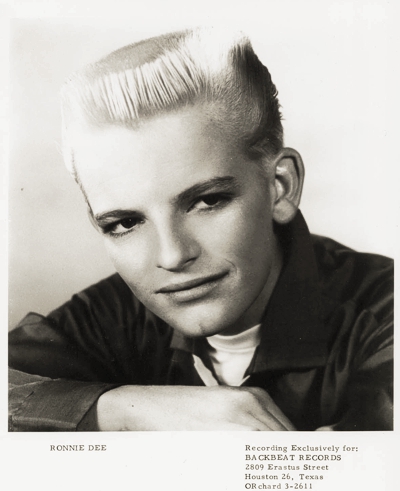 I had just closed the front door and was headed down the street to the store. I started thinking about the last song I heard before leaving, "Action Packed" by Ronnie Dee (Ronnie Dawson). I'd heard it a bunch of times but this time it was a giggle fest. It had never really been anything but a second tier rockabilly song, but this time I found it hilarious. Dawson was about nineteen when he recorded it, but it sounds as though he's fourteen. I mean, look at that photo above. And he's got attitude, approaching chest beating. Let's say you're a hot babe in 1959. A guy with a peroxide flat top whose voice hasn't even cracked yet, singing "If you chicks are timid, you just better turn back, 'cause when I take a ride in my car it's gotta be action packed. Hear me, action packed, yeah!" Right, dude's got a learner's permit. In Dawson's defense, he did do the original version of "Rockin' Bones", a song the Cramps covered. That does not lessen the giggle factor.