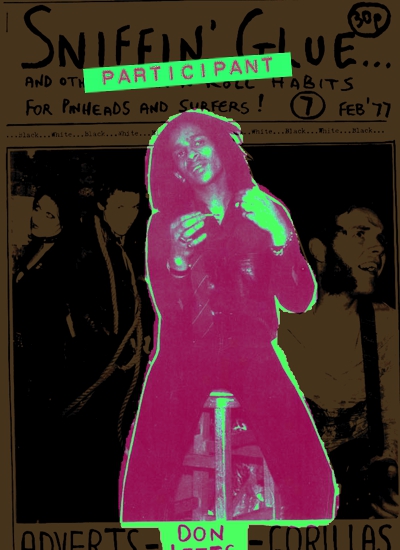 Don't know how many of you have seen this but it's just about the best documentary on punk rock as I've seen. Punk: Attitude, a film by Don Letts who quite definitely has the credentials to back it up. He was a DJ at the Roxy, an early punk club at ground zero, London, England, 1977. There were so few punk records at the time that he filled in with reggae, which is a big reason why so many early punk rockers picked up on reggae. He later started filming gigs, later still was in Big Audio Dynamite with Mick Jones of the Clash. He's been around, and he knows what's what. I've posted about him, or mentioned him several times here, most recently just a week or so ago on the Marvin Gaye post (the video talk about "What's Goin' On"). Dude is as important as anyone out of the London punk scene, more influential than most, eloquent and with a knack for pointing out the important elements. An anthropologist of sorts.

Punk Attitude is his two hour documentary on the music, the attitude, the life and the history of punk rock, with all sorts of heavyweights. Good as this documentary is, you really need to get the DVD set because the extras include several short mini-docs (women in punk, L.A. punk, etc.) that are just as good.

Shit, Tom; that dvd's been on a shelf (which to my defence is below knee level and partly hidden by a chair) for years without me poppin it out of the cover! Thanks for the reminder! Its a two-disc version, so probably has all the extras you mention... And while flippin thru the covers on the same shelf, I just found a whole bunch of other music-docus/lives I for various reasons have put off watching; a couple with The Residents, The Cramps in Belgium 2006, Bob Wills "Fiddlin' Man", "The Story of Anvil", "The Filth and The Fury"+"Punk in London"+"I Need That Record" (might have seen these three - can't remember), and a 7-dvd box set of Martin Scorcese's "The Blues"... Dang! I've got my work cut out!

That's me too, tons of "must have" DVDs that I've not gotten around to watching. I remember when the "Help!" was released on DVD, me: "I'm watching this tonight!" that was, I dunno, about eight years ago. Have I watched it? Nope! And I don't dare start going through the stacks. The funny thing is that you'd think during the lock down I'd get caught up. Nope again! In my defense, the last time I checked watching movies was optional so I don't sweat it. "Help!" will be there when I'm eighty...