THE CAL RIPKEN OF GUITAR FACE 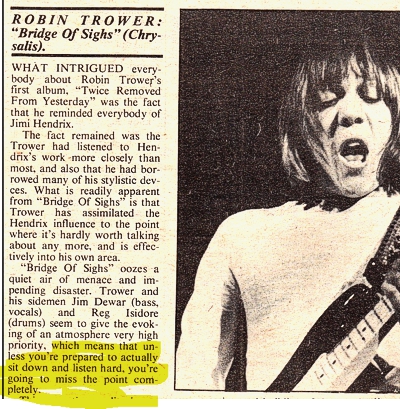 Oh man, I hadn't heard this one in ages. Before you click, here's the context. When I was in high school, it was guitar, guitar, guitar. Everyone was listening to guitarists, debating about guitarists, and trying to discover hot shit guitarists before their friends did. And it was all heavy on the Hendrix. My brothers and I were Johnny Winter boosters. We kind of scoffed at people who stuck to their Hendrix guns, not even considering any other guitarist. We were doing some serious digging. Besides Johnny Winter there was Ritchie Blackmore, Frank Marino (Mahogany Rush) Rhino (from Captain Beyond), Roy Buchannan, Randy California, Peter Kaukoken, Rory Gallagher, Werner Fritzschings (Cactus) and a slew of others. The important thing is we went looking. We didn't look to our peers to decide what guitarist was hot shit.

One guitarist that I always forget about when I think back about those days is Robin Trower. He was someone my brothers and I and the Hendrix freaks could agree on. Mostly because there was a detectable Hendrix influence. But still, to us, Johnny Winter had it over the whole lot.

Trower's Bridge of Sighs LP was the one. I haven't heard it in ages but a chance encounter with “Little Bit Of Sympathy”, the last cut on the album, made me realize how ingrained it is in my memory. I'll have to remember that at the next Air Guitar competition.

~ NOTE: ALL MEDIA IS HOSTED BY THE BLOGS & SITES NAMED BELOW ~
Listen:
Robin Trower - Little Bit Of Sympathy mp3 at 30 Milkshakes