TO HACK SURFERS AND WALLFLOWERS 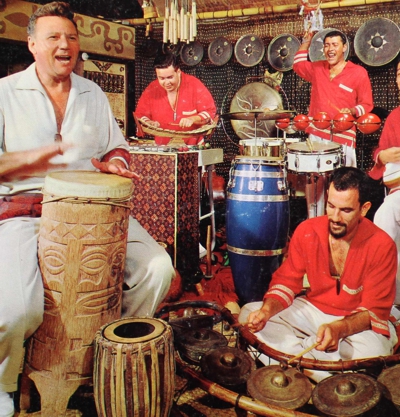 My introduction to Martin Denny came through thrift stores. When I started making the rounds in my mid-late teens, Martin Denny LPs were in every fucking one of them. At the time my crowd was the guys from the beach. Guys. We were a bit too geeky, not cool enough, so few of us had regular girlfriends and those that did wouldn't think of bringing them to the beach. This freed us up to be uncivilized. It wasn't like we we were going to get laid any less. Socially, we had nothing to loose, so we got into some oddball shit. Going to the thrift stores and succumbing to Martin Denny's omnipresence was a rite of passage.
I have this great photo, buried somewhere in the hall closet, of my brother and two of the guys (I forget which friends they were), posing with three Martin Denny LPs as proud as a big game hunter with his trophy kill. We were into our own thing, free from the bondage of conformity. It was a pre-punk course in not giving a shit. And Dick Dale and Martin Denny ruled the backyard parties.
~ NOTE: ALL MEDIA IS HOSTED BY THE BLOGS & SITES NAMED BELOW ~
Listen:
Martin Denny - Forbidden Island mp3 at Earmilk
Martin Denny - Jungle Madness mp3 at Beware of the Blog
Martin Denny – Misirlou mp3 at Dinosaur Gardens
Video:
Martin Denny - Quiet Village at YouTube
Martin Denny on Hawaii Calls (TV) at YouTube
Martin Denny - Short interview at YouTube From some film about tiki culture
Posted by Tom G. at 8:41 PM

All links are wrong/missing. Thanks!

Thanks for the head up. Links are fixed.