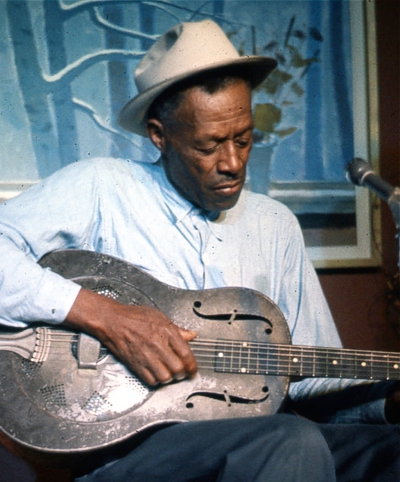 I don't think I've ever seen a cooler photo of Son House. From the clothes he's wearing, to the guitar he's playing, to the look on his face. Which reminded me, I've never posted anything by him. Here's one, recorded in 1965 after he'd already been recording for something like thirty years. No guitar though, this one is just vocal and what sounds like knee slapping. Believe me, his voice is enough. To Son House, Muddy Waters might as well have been Blues Hammer. The feature tonight though is the video linked below, from 1969 a "Full live performance". It looks very much like a TV studio, but that's splitting hairs, It really is worth watching because he was one of the last, truly OG, delta blues guys. His playing is good, and there's a taste of him singing with no guitar at all.

~ NOTE: ALL MEDIA IS HOSTED BY THE BLOGS & SITES NAMED BELOW ~
Listen:
Son House - Grinning In Your Face mp3 at 30 Milkshakes
Video:
Son House - Full live performance at YouTube 1969
Posted by Tom G. at 9:38 PM